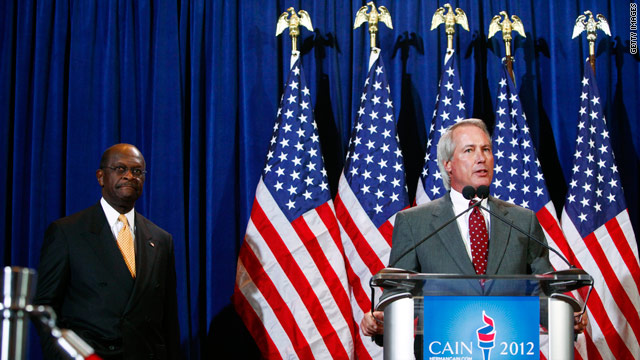 (CNN) – GOP presidential contender Herman Cain’s attorney, Lin Wood, had a warning for presidential candidates Thursday after the candidate revealed more details about the relationship he had with Ginger White.

“This idea that one person can go out and make an accusation that turns a friendship into an alleged sexual affair, the candidates better be careful,” Wood said during an interview on CNN’s “Piers Morgan Tonight.” “That’s a slippery slope that I don’t believe this country wants to go down.”

Monday White came forward with evidence of what she claimed was a 13-year extramarital affair with Cain, including phone records. Cain insists the two were just friends and owed to providing financial assistance to White, whom he said was at times “desperate” for help “in these tough economic times” during an interview with the New Hampshire Union Leader Thursday.

But Wood argued the messages exchanged between White and Cain were unevenly weighted toward his accuser, and without merit. For Wood, all questions should be directed to White, not Cain.

“I believe that if you’re going to attack and impugn someone’s character, then do it with facts,” he said.

“Don’t judge a character simply because someone makes an accusation. You oughta be taking your questions to (the accuser).”