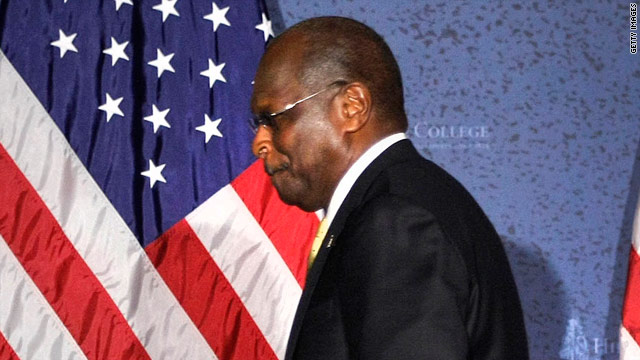 (CNN) – Businessman Herman Cain said Thursday his wife was not aware of his friendship with Ginger White until she publicly claimed a 13-year affair with the GOP presidential candidate Monday.

During a meeting with the editorial board of the New Hampshire Union Leader Cain revealed that his wife, Gloria, had no knowledge that he’d provided financial assistance to White, or that the two were friends at all.

“That was the revelation and the surprise that my wife found about when (White) went public with this,” he admitted. “My wife now knows. My wife and I have talked about it. And I have explained it to her.”

Sharing that his wife understands he is “a soft-hearted, giving person, like a lot of men,” Cain continued, "She did not know that we were friends until she (White) came out with this story." But he said his wife is “comfortable with the explanation that I told her regarding having to help (White)."

Insisting he and White were only friends, Cain stated he gave her money because she told him "I was the only person who was a friend at the time – and I underscore 'friend' – that was in a position to help her."

When White emerged with claims of Cain's infidelity on Monday she also provided records of text messages and phone calls to a local television station in Cain's hometown of Atlanta.

But the former conservative radio talk show host told the New Hampshire Union Leader that 47 of those were messages from White asking for his help and the rest were his responses to her.

"She was out of work and had trouble paying her bills and I had known her as a friend," Cain said.

Adamant that none of the messages received from White were threats or “any indication that there might be some blackmail or anything like that” Cain said, “Look. I thought she was a friend. End of story.”

Cain will meet his wife for the first time face-to-face Friday, and admitted in the newspaper’s editorial meeting he would end his campaign for the 2012 GOP nomination for president if it is what his wife wants.

“But my wife wouldn’t ask me to get out,” he said. “I would make a decision based upon how all of this stuff is affecting her. Because I will put her first, but she’s not the type to say 'you oughta get out.'”

His national poll numbers have fallen following allegations of sexual harassment. Two days ago Cain said he would "reassess" his campaign.

Citing family and finances Thursday, specifically, backers who may not want to contribute because “they see this cloud not going away,” the former CEO of Godfather’s Pizza said “running for president has become a very dirty game.”

“Part of the assessment is what the solution is moving forward,” he continued.

But Cain’s communications director in Iowa said Thursday, "The campaign is full steam ahead. Herman Cain is in it to win it."

Lisa Lockwood affirmed, "He always has been and that has not changed."

Cain's campaign is scheduled to release ads in Iowa Friday and there are signs the campaign is moving forward with efforts in another early voting state.

Cain's national political director Bo Harmon will work in New Hampshire through next week and plans to spend a majority of his time in the first primary state before voters head to the polls Jan. 10, he told CNN.

Harmon said he was focused on helping run grassroots and voter outreach efforts for Cain in the state.