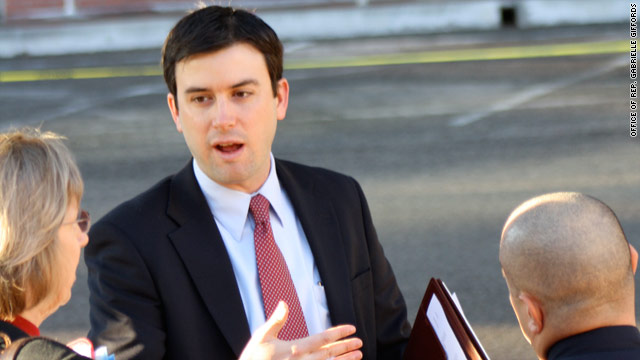 Washington (CNN) – Gabriel Zimmerman was the first congressional staffer killed while performing their official duties. Thursday the House of Representatives passed a resolution to memorialize the aide to Arizona Rep. Gabby Giffords by naming a meeting room in the Capitol complex after him.

The thirty-year-old aide was slain in January after alleged gunman Jared Loughner opened fire on a "Congress on your Corner" event at a Tucson grocery store where constituents gathered to meet with Giffords.

In addition to Zimmerman, five others were killed, and 13 people were injured, including Giffords, who is continuing to recover from a gunshot wound to the head.

Giffords' close friend in the House, Rep. Debbie Wasserman Schulz, D-Florida, sponsored the resolution, which designates a room on the second floor of the Capitol Visitors Center the "Gabriel Zimmerman Meeting Room." Arizona Republican Rep. Dave Schweikert was the GOP co-sponsor of the resolution.

For a short time on Wednesday the partisan rhetoric that has been common on the House floor was suspended as both Democrats and Republicans, including the entire Arizona Congressional delegation, paid tribute to Zimmerman.

An emotional Wasserman Schultz praised the young staffer's service and close relationship to Giffords. She said Giffords' husband Mark Kelly told her recently that in addition to relying on Zimmerman's professionalism, "Gabby also looked upon him as a younger brother."

The room that will bear Zimmerman's name, currently known as "HVC 215", is the weekly meeting spot for the House Democratic Caucus, as well as regular press secretary meetings and other congressional functions.

"I can think of no better way to memorialize Gabe's service and ultimate sacrifice than to have this meeting place forever carry his name and memory," Wasserman Shultz said.

Arizona Rep. Raul Grijalva said of Zimmerman, "It's not his death, but his work and ideals that should be recognized here."

Like those who are killed while serving in the military and receive honors, Texas Rep. Pete Olson, said this staffer should also be recognized, "while Gabe Zimmerman was not wearing a uniform the day he died he deserves to be immortalized nonetheless."

"We deeply appreciate this show of support by the House of Representatives," Ben Zimmerman, Gabe's younger brother, said Wednesday in a statement released by Giffords' office, speaking on behalf of the Zimmerman family. "This is a wonderful way to memorialize my brother, Gabe."

President Barack Obama already signed a bill naming a federal courthouse in southern Arizona after federal Judge John Roll, who was among those killed in the shooting.

Giffords continues her to work on her recovery in Houston and will not be present for the vote, according to her office. Though she couldn't participate personally in Wednesday's bipartisan tributes, Giffords' Twitter account closely monitored the debate and featured quotes from both Republicans and Democrats. The injured Arizona congresswoman has returned to the House just once since the shooting, showing up unexpectedly on the House floor in August to cast her vote in favor of a bill to raise the debt ceiling.

The resolution notes that there are over 15,000 people who work as staffers on Capitol Hill. It also quotes House Speaker John Boehner, who after the January shooting said, "I am horrified by the senseless attack on Congresswoman Gabrielle Giffords and members of her staff. An attack on one who serves is an attack on all who serve."

The move to dedicate the room to Zimmerman comes a couple of weeks after the release of a book by Giffords and her husband, retired astronaut Kelly. In the book Kelly criticized Boehner for not making an effort to reach out to them after the shooting.

"Considering that she was a member of Congress and he was the highest ranking member, we thought he'd ask to visit Gabby, or at least give a call to see how she was doing. Our only contact with him had been a simple get-well card he'd sent a few days after Gabby was injured," Kelly wrote in the book.

But Kelly recently met with Boehner's office on a visit to Washington about plans to memorialize Zimmerman and the speaker's office stresses that they have been working on the issue with Zimmerman's family and Giffords' staff for several months.

A dedication is planned for the room for the beginning of next year, according to a release from Giffords' office.