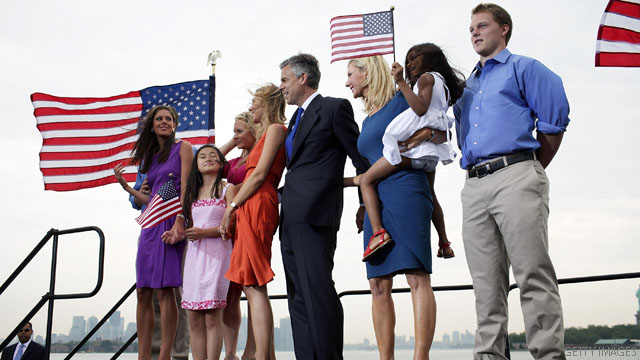 (CNN) – The Huntsman daughters are at it again, this time promoting their presidential candidate father to the tune of Justin Timberlake's hit song "Sexy Back."

"We're bringing Huntsman back, the rest of them is one big circus act. We're right behind the guy who's right on track," Jon Huntsman's three daughters sing in the song released Thursday.

They also take shots at their father's rivals in the 2012 Republican presidential primary race, complete with quotes from some of them.

"Herman Cain, we like your pizza but you can't explain how 9-9-9 will get us back in shape," the daughters sing, referencing the former pizza executive's "9-9-9" tax plan. "So pass the pizza man we won't complain."

Huntsman's daughters, Liddy, Abby and Mary Anne, who are popular under their Twitter handle @Jon2012girls produced a viral campaign video earlier this year, which spoofed a Cain campaign video. They have since appeared consistently on television on behalf of their father.

Although their tactics were met with initial skepticism from Team Huntsman, the campaign has embraced their appeal and presence on the campaign trail.

Huntsman, who previously served as Utah governor and U.S. ambassador to China under President Barack Obama, has failed to gain national traction in the 2012 election. He has spent most of his attention on the first-in-the-nation primary state of New Hampshire, where his state-wide poll numbers have increased incrementally.