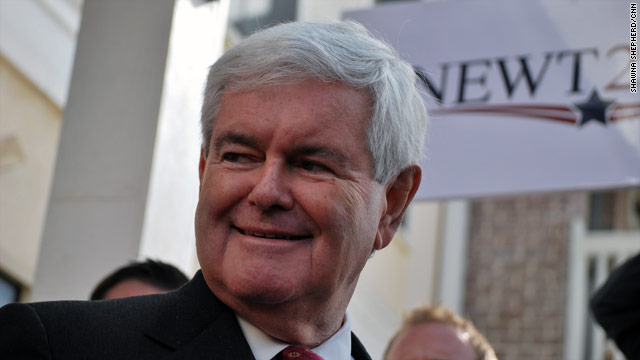 (CNN) – Along with his poll numbers, Newt Gingrich's confidence seems to be growing by the day.

His comments, which came in an interview with ABC News, follow a day of good news for the former House Speaker's odds in Florida, an early voting state in the primary and caucus calendar.

A new poll puts him well ahead in the GOP presidential race with 50% of support among likely Republican primary voters in the Sunshine State. Meanwhile, former Massachusetts Gov. Mitt Romney trailed with 19% of support.

On Wednesday, Gingrich said he feels at least 60 days ahead of where he expected to be by now and described his recent surge in the polls as a surprise to his campaign, which nearly fell apart earlier this year.

"I would have thought originally it was going to be a 'Mitt and Not-Mitt'," Gingrich said on Fox News, talking about his early predictions for the top two Republican contenders. "It may turn out to be 'Newt and Not-Newt,' and that's a very different formula."

But on Thursday, any hesitation Gingrich had about securing the nomination seemed to disappear. Gingrich said he was unfazed by the attacks from his opponents, who are now jumping on his soaring frontrunner status.

Asked along a ropeline in Iowa about his newfound confidence in predicting his own nomination, Gingrich simply said: "I'll leave it at that."