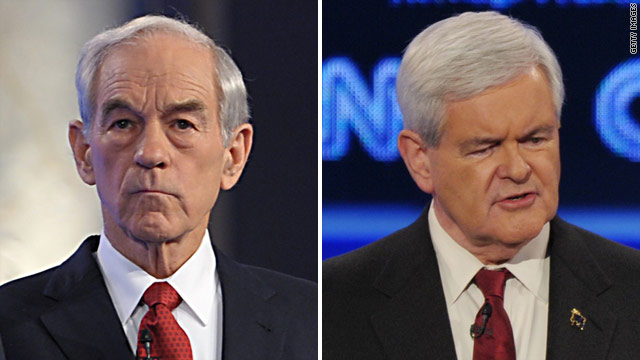 At a swing through a natural health foods store in Portsmouth, Paul likened the former House speaker to the long-time front-runner in the Republican race: Mitt Romney.

"[Gingrich] is a flip-flopper, so he can hardly be the alternative to Mitt Romney," Paul said of his former congressional colleague.

After admiring the health store's supply of raw, unpasteurized milk and yogurt, Paul told reporters the former House speaker's record was not being scrutinized enough as he surged in support in several early voting states.

"I think he's getting a free ride," Paul said of his former congressional colleague.

The 150-second web ad released by the Paul campaign Wednesday is a slickly-produced slam on Gingrich that suggests he has changed his views on some issues to win broader conservative support.

Paul did not reserve all his criticism for Gingrich, however. He said the media were preoccupied with sexual allegations against Herman Cain, adding said he had "no opinion" on whether the embattled candidate should drop out in the wake of allegations of sexual impropriety.

"That's his own business," Paul said, explaining he differed with Cain on economic policy. "I wish he'd dropped out because he's proposing a national sales tax and he used to work for the Federal Reserve. That should have been enough for him to lose support and need to drop out."

Cain served as deputy chairman of the board of directors of the Kansas City Federal Reserve bank in the early 1990s.