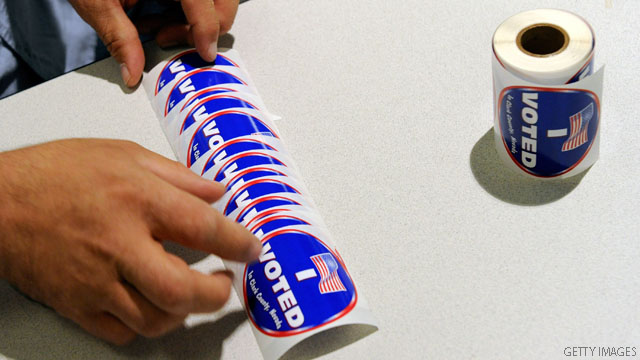 Capitol Hill (CNN) – One month before the Iowa caucuses, a seminal event in American democracy, excitement does not seem to be the dominant feeling among voters. Try cynicism.

Trust in government is at an all-time low. A whopping 72% of Republicans have not made up their minds on a definite candidate yet (an increase in that figure from October). And among a core group of Democrats – whites with no college education – half say they don't want President Obama on the ballot in 2012.

But voters on all sides may be more pessimistic than the situation warrants, or so says an award-winning economist. Listen here for our "Campaign Cynical" podcast or click to keep reading.

Bryan Caplan is a professor of economics at George Mason University in Fairfax, Virginia and has written a book, "The Myth of the Rational Voter", which bluntly questions a basic principal in democracy, whether voters make logical decisions.

"Voters actually are driven to be pessimistic," Caplan told CNN Radio, "They have a tendency to see things as worse than they actually are."

Caplan looked at hard measures of issues in America, things like economic indicators or the amount of foreign aid funded by the U.S., and compared those figures with what Americans believed them to be. He found that people overwhelmingly believed those numbers to be far more negative, meaning more opposed to their wishes, than the figures were in reality. For example, Americans thought U.S. foreign aid was a huge part of the federal budget when it is relatively small.

It is as if Americans are looking through rust-colored glasses.

"When you really look at what government in the United States does, it is very similar to what people want it to do," Caplan contends. "We spend a ton of money on popular stuff, like Social Security, and very little money on unpopular stuff, like foreign aid….Yet, the public is so pessimistic that even when they're getting what they want, they're convinced they're not listening to them at all."

This in turn, Caplan theorizes, creates a system where politicians push the least-painful and least-offensive ideas to already distrustful voters. And candidates avoid proposing actual, tough solutions that would cause pain.

"Whatever they do, people are going to be angry at them. If they were actually to speak honestly and frankly and propose something realistic, voters would hate them," he said.

In other words, cynicism is so high that even voters who want tough solutions will question whether a politician proposing those kinds of sacrifices can be trusted.