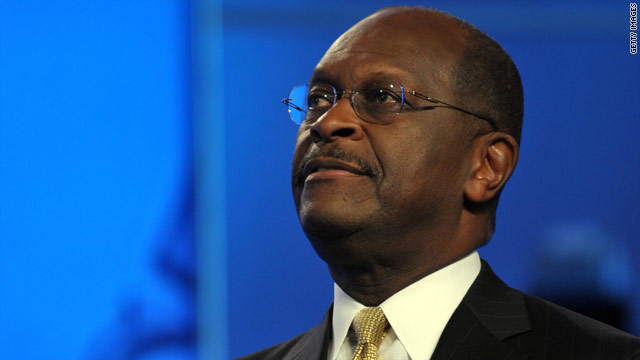 (CNN) – Herman Cain was dealt a blow via new poll numbers in Iowa that indicate the Republican presidential candidate's support in single digits.

The Des Moines Register's poll, parts of which were released Friday, showed the former pizza executive with eight percent support among likely Republican caucus goers, down from the 23% he received in October.

Cain, who has defended himself against charges of sexual harassment in recent weeks, was hit with a new accusation Monday that he engaged in a 13-year extramarital affair with Atlanta businesswoman Ginger White.

The new survey, taken Sunday through Wednesday, showed the latest charge hurt his popularity. On Sunday his support stood at 12% and dropped over the four-day poll to 4% Wednesday.

When asked which candidate likely early voters wanted to see in person, Cain received a 22% average on Sunday and Monday and 8% on Tuesday and Wednesday.

Over the same period of time Republican voters said it was increasingly likely Cain would weather a scandal in the White House. Those figures rose from 25% at the start of polling to 47% at the end of polling.

Cain is in the process of "reassessing" the state of his campaign and has said he will discuss the race with his wife and family over the weekend before making a final determination by Monday.

Despite attention paid to the first-in-the-nation caucus state, likely caucus goers are now less interested, at 8%, in seeing the former radio host in person and 27% of respondents said he is the "least knowledgeable" candidate in the 2012 GOP field.

The poll surveyed 401 likely Iowa Republican caucus goers between Nov. 27 and Nov. 30 with a sampling error of plus or minus 4.9 percentage points.