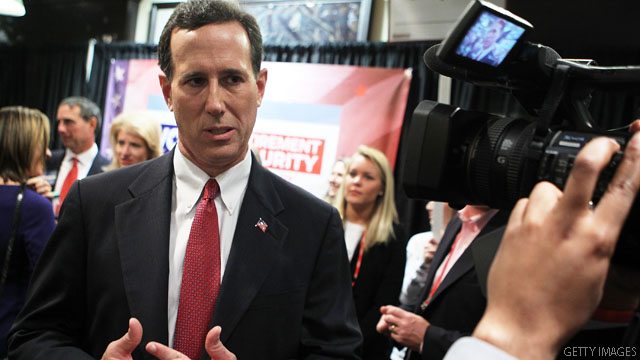 Santorum was responding to a series of triumphant statements by Gingrich, who told ABC News on Thursday he was going to be the Republican nominee.

On Friday Gingrich was slightly less bold, telling Fox News that voters would make the decision but that his campaign is moving in the right direction.

Santorum has watched Gingrich vault to the top of polls in early voting states while he remains stubbornly mired in the single digits. But Gingrich is not the first candidate to catch fire among GOP voters, and Santorum suggested Friday the former House speaker may have let the success go to his head.

"Newt is certainly, you know, portraying confidence right now," Santorum told reporters at a Merrimack, New Hampshire High School Friday. "But I also think humility is an important thing in a president, and having the understanding of how this is a process that is a long way from over."

Before Gingrich, Rep. Michele Bachmann of Minnesota, Texas Gov. Rick Perry and businessman Herman Cain all sparked enthusiastic support in the Republican base.

Santorum said primary voters were attune to a lack of humility in a nominee, and would assess candidates in part based on "how they handle themselves."

"How they handle success is a pretty good indicator as to what they're going to be like in governing the country," he said.