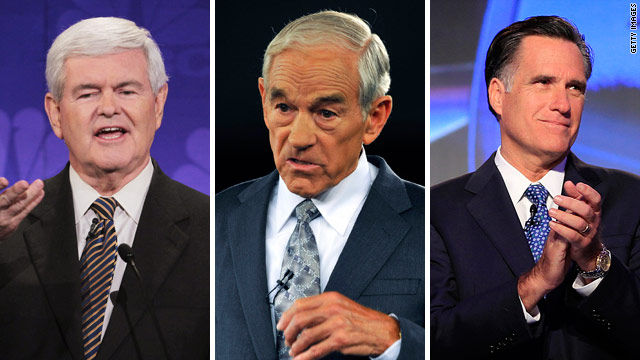 Gingrich ahead in Iowa, poll shows; Romney drops to third

(CNN) - With a month to go until Iowans select a candidate for the 2012 GOP presidential nomination, former House Speaker Newt Gingrich has extended his lead in the state, while Texas Rep. Ron Paul has entered second place and former Massachusetts Gov. Mitt Romney has dropped to third.

A new poll from the Des Moines Register finds 25% of likely Republican voters in Iowa backing Gingrich, while 18% support Paul and 16% say they’d go for Romney.

Other candidates for the nomination – including Herman Cain, who announced Saturday he was suspending his presidential campaign – polled in the single digits.

Gingrich’s rise in Iowa is a marked change from a month ago, when he was polling in fourth place in the Hawkeye State. A CNN/ORC International Poll taken October 20-25 found only 10% of registered Republicans in Iowa backing Gingrich, while Romney held the lead with 24%. Ron Paul was in third place in October, with 12%.

Romney, who won the support of the Sioux City Journal earlier Saturday, has recently amped up his effort in Iowa, sending direct-mail fliers to voters and buying television advertising space.

Gingrich has a smaller operation in the state, only opening his first campaign office there Wednesday.

Iowa Gov. Terry Branstad, a Republican, said Thursday that Gingrich would need to step up his campaign in the state if he planned on winning the first-in-the-nation caucuses.

"He may be ahead in the polls, but can he deliver?" Branstad asked. "That's the question I have."

Former Pennsylvania Sen. Rick Santorum and Minnesota Rep. Michele Bachmann, who have campaigned heavily in Iowa, came in at 6% and 8%, respectively. Bachmann won the intensely watched Ames Straw Poll in August, but has seen her support declining since then.

The Des Moines Register poll was taken by phone from Nov. 27-30 from 401 likely Republican caucus-goers. The sampling error was 4.9 percentage points.