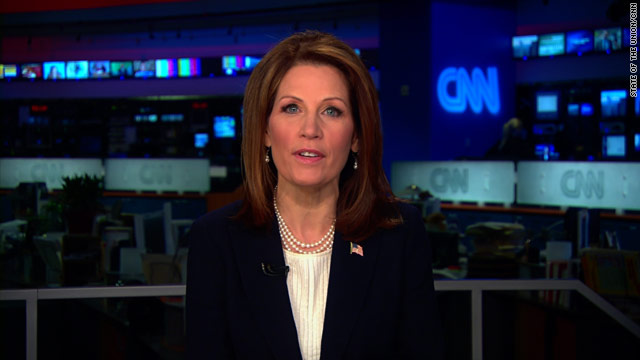 Bachmann: Tea Party will ‘come home’ to my campaign

(CNN) – In the scramble for Herman Cain supporters after his exit from the 2012 Republican presidential campaign, Minnesota Rep. Michele Bachmann said Sunday that she has already gotten a boost.

“One thing we’ve seen a lot of is Herman Cain supporters have been calling our office and they’ve been coming over to our side,” Bachmann told CNN’s “State of the Union with Candy Crowley” program, adding “part of that is because people see that I’m the tea party candidate in the race and they saw Herman Cain as an outsider and I think they see that my voice would be the one that would be most reflective of his.”

Fellow Congress member and presidential candidate Rep. Ron Paul of Texas also says his candidacy will benefit from Cain’s withdrawal from the race Saturday, but Bachmann said she is more ideologically linked to the tea party movement that liked Cain.

“As tea partiers see where the candidates stand on the issues, they’re going to come home and I think on January 3, a lot will come home,” Bachmann said of the date of the Iowa caucuses, the first formal test of the primary season.

Bachmann won the Ames Straw Poll in Iowa last August, giving her candidacy a boost, but support for her campaign has since fallen, according to national polls.

To Bachmann, the Ames Straw Poll was “the best poll that you had” so far and showed she was the “most electable” in the GOP field.

Iowa caucus-goers “take this process very seriously and they’re vetting all of the candidates” Bachmann said, adding that “there’s a lot of surprises that they’re finding in this race.”

“They’re going to see of all of the candidates, I’m the one that doesn’t have the political surprises,” she said.