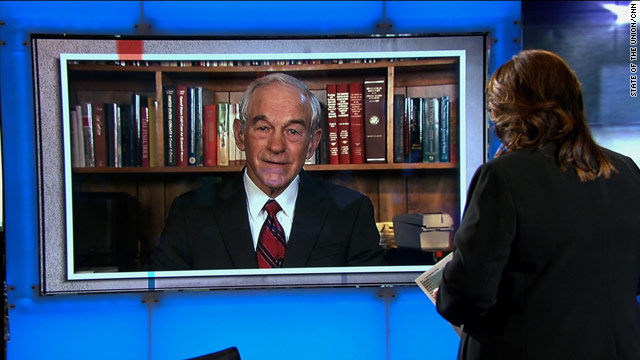 Rep. Paul on Trump: I didn’t know he could anoint people

During an interview on CNN’s “State of the Union with Candy Crowley,” Paul said he was surprised at Trump’s current role in the race, including a scheduled debate that Trump will moderate a week before the January 3 Iowa caucuses..

“I don’t understand the marching to his office,” the congressman said. “I didn’t know that he had the ability to lay on hands and anoint people.”

In the latest volley of an ongoing feud between Paul and Trump, the congressman making his third bid for the GOP presidential nomination said his differences with Trump may be philosophical, but Trump started it.

At a speech to the Conservative Political Action Conference in February 2011, Trump said the twelve-term congressman had “no chance” at winning the Republican nomination for president or at beating President Barack Obama.

Paul said the differences between the two men were “philosophic” and added that Trump’s “personality doesn’t like to be challenged.”

In addition, Paul said, the Republican Party could hurt itself by allowing Trump to moderate what will be the final debate before the Iowa caucuses.

Trump cancelled his keynote address at an event held by the Iowa Republican Party earlier this year after announcing he would not seek the GOP presidential nomination. The event, a large fundraiser for the party, was subsequently cancelled.

“I’ve gotten a lot of good, favorable responses from the people of Iowa, even the people in the party…because they were very unhappy with the way he treated them,” Paul said.