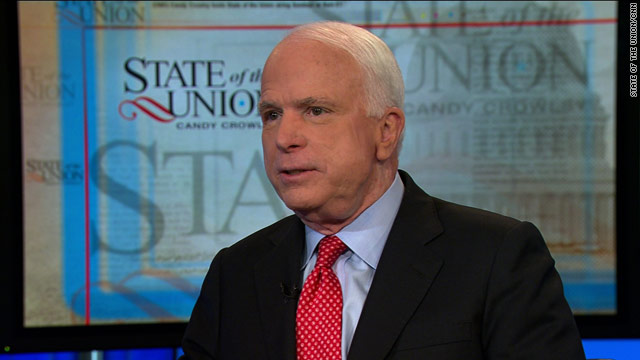 Sen. McCain: Arizona could be 'up for grabs'

Washington (CNN) – Republican Sen. John McCain said Sunday that his home state of Arizona could be won by President Barack Obama in the 2012 presidential election.

The 2008 GOP presidential nominee told CNN Chief Political Correspondent Candy Crowley that Arizona and other southwest states “can be up for grabs” due to the growing Hispanic vote.

“The demographics are clear,” McCain said on CNN’s “State of the Union.” “The Hispanic vote will be a major factor in national elections.”

Addressing the major issue of immigration, McCain admitted his party has some work to do, but added that Obama also faces challenges.

The Republican presidential candidates are divided over how to deal with more than 10 million immigrants who came to the country illegally and now are entrenched in U.S. society, many with families, jobs and roles in their communities.

Former House Speaker Newt Gingrich has called for a system of review boards to determine whether individuals could remain in the country or be forced to leave, a position characterized by conservative competitors such as Minnesota Rep. Michele Bachmann as offering amnesty for lawbreakers.

“I think that the Republican Party has to discuss this issue in as humane a way as possible,” McCain said. At the same time, he noted that “the enthusiasm of Hispanics for President Obama is dramatically less than it was in 2008 because he has not fulfilled his campaign promises either, so I view the Hispanic vote is up for grabs.”

McCain argued most Hispanic voters agree that “we need so secure our borders, if for drugs alone,” but added that “we need to treat people humanely…people who are here, who have been here a long time.”

But, he said, “The fact is, we don’t need to trigger another flood of illegal aliens by believing if they can get across our border they would therefore be home free.”