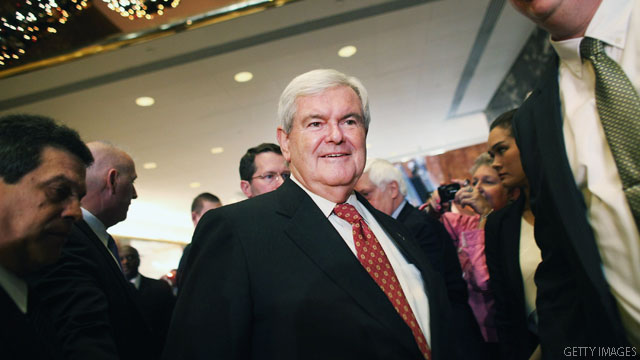 (CNN) - Newt Gingrich tops a third straight poll of likely Iowa Republican caucus goers. Thirty-three percent of people questioned in an ABC/Washington Post survey say that the former House speaker and GOP presidential candidate is their choice for their party's nominee. The poll's Tuesday release comes four weeks before the Jan. 3 Iowa caucuses, which kick off the Republican presidential primary and caucus calendar.

Gingrich was on top of the field in a Des Moines Register Iowa poll released Saturday and an NBC-Marist poll that came out on Sunday.

According to the ABC/Washington Post poll, former Massachusetts Gov. Mitt Romney and Rep. Ron Paul of Texas are tied at 18%, with Texas Gov. Rick Perry at 11%.

Two candidates who have been crisscrossing Iowa, Rep. Michele Bachmann of Minnesota and former Sen. Rick Santorum of Pennsylvania, are at 10% and 7% respectively. The survey indicates that Jon Huntsman's at 2%. The former Utah governor and ambassador to China has spent nearly all of his time campaigning in New Hampshire, which votes second after Iowa. Four percent are unsure who to support and six in ten say they could change their minds over the next four weeks.

Gingrich's campaign was left for dead by many in late spring, after a bunch of controversies which resulted a number of top advisers and staffers quitting the campaign. They also faced financial difficulties. But thanks to strong performances in many of the Republican presidential debates this autumn, and thanks to stumbles by Bachmann, Perry and businessman Herman Cain, who suspended his campaign this past weekend, Gingrich has soared in both national polling and in surveys in the crucial early voting states.

According to the ABC/Washington Post poll, Gingrich leads Romney by 27 points when it comes to experience, by 14 points on standing up for what he believes, by 13 points when it comes to reflecting the values of the GOP and by 10 points on understanding the problems of people like me. Gingrich holds a narrower five-point margin over Romney on electability and is basically tied with Romney on honesty.

The survey indicates that, at least in Iowa, the issue of illegal immigration may not hurt Gingrich, who has come under attack by some of his rivals for his calls for a pathway to legitimacy for some longtime illegal immigrants. By 19 points, Hawkeye State Republicans say Gingrich would do a better job on the issue over Romney, who has been critical of Gingrich over immigration. Only 15% say Gingrich's position on the issue is a reason to oppose him for the nomination, with nearly four in ten saying it's a reason to support him.

Separately, only 16% say Gingrich's marital history is a reason to not support him. Gingrich has been married three times and has admitted to extramarital affairs.

Meanwhile, the poll indicates the health care measure signed into law over five years ago by then-Massachusetts Gov. Romney, which includes an individual mandate and is considered by some Republicans as the model for President Barack Obama's national health care law, could be damaging. Forty-five percent of those questioned say the so-called "RomneyCare" law is a major reason to oppose Romney for the nomination.

A CBS News-New York Times poll also released Tuesday morning indicates that 31% say Gingrich has the best chance of beating Obama next year, with 29% saying Romney is most electable.

The CBS News-New York Times poll was conducted Nov. 30-Dec. 5, with 642 Iowa registered voters who say they are definitely or probably attending the GOP caucuses questioned by telephone. The survey's overall sampling error is plus or minus four percentage points.