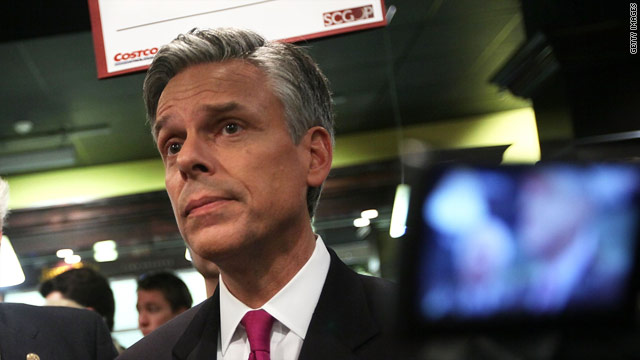 (CNN) - Former Utah. Gov. Jon Huntsman, known for having the most moderate view on climate change in GOP presidential field, suggested Tuesday the verdict was still out on mankind's role in the situation.

"Because there are questions about the validity of the science...I think the onus is on the scientific community to provide more, to help clarify the situation," Huntsman said at the Heritage Foundation, a conservative think tank in Washington, D.C.

He added that while he defers to the National Academy of Science, whose members largely argue in favor of a manmade impact on climate change, he said when there's some "interruption or disconnect" from scientists who disagree, then the debate "needs to play out" among that community.

Huntsman's remarks seem to mark a slight pivot in the candidate's position on the issue, as the former governor has thus far been a vocal supporter of scientific findings supporting manmade climate change.

Notably, he made headlines in August when he tweeted out a blunt statement on his position.

"To be clear, I believe in evolution and trust scientists on global warming. Call me crazy," Huntsman wrote.

On the campaign trail, he's also chided fellow Republicans on the issue, saying they're ignoring the evidence for political reasons.

"All I'm saying is that, in order for the Republican Party to win, we can't run from science," he said at a September presidential debate.

And Huntsman, who's lagging significantly behind in national polls, warned in an ABC News interview that the GOP was migrating towards becoming the "anti-science" party.

"I think we find ourselves on the wrong side of science, and, therefore, in a losing position," he said.

But Huntsman insisted Tuesday he wasn't waffling on his thoughts about climate change and said he still relies on the opinions of those in the field.

"Do I defer to science and those that happen to do this for a living on this issue? Yeah, I do," he said.