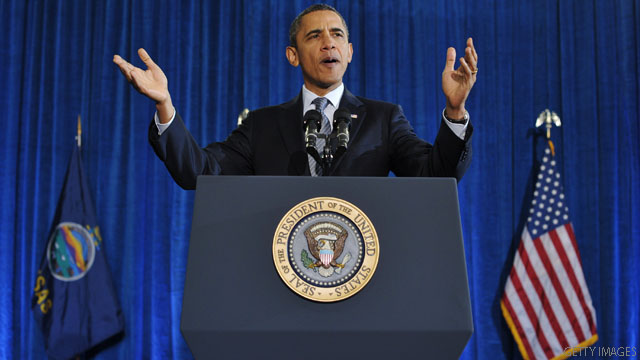 (CNN) - President Barack Obama said Tuesday that economic inequality in America is at "a level we haven't seen since the Great Depression" and "hurts us all."

"When middle-class families can no longer afford to buy the goods and services that businesses are selling, it drags down the entire economy, from top to bottom," Obama said in a speech pushing for Congress to approve provisions of his jobs package.

"Inequality also distorts our democracy," he continued, sounding a theme expressed by Teddy Roosevelt in a speech more than a century earlier. "It gives an outsized voice to the few who can afford high-priced lobbyists and unlimited campaign contributions, and runs the risk of selling out our democracy to the highest bidder. And it leaves everyone else rightly suspicious that the system in Washington is rigged against them - that our elected representatives aren't looking out for the interests of most Americans."

Obama said that congressional Republicans "want to go back to the same policies that have stacked the deck against middle-class Americans for too many years."

"Their philosophy is simple: We are better off when everyone is left to fend for themselves and play by their own rules," Obama said in a speech pushing for passage of provisions of his jobs package. "Well, I'm here to say they are wrong."

Sounding a theme from a speech more than a century earlier by Teddy Roosevelt, Obama said: "I'm here to reaffirm my deep conviction that we are greater together than we are on our own."

"I believe that this country succeeds when everyone gets a fair shot, when everyone does their fair share, and when everyone plays by the same rules," he said. "Those aren't Democratic or Republican values; 1% values or 99% values. They're American values, and we have to reclaim them."