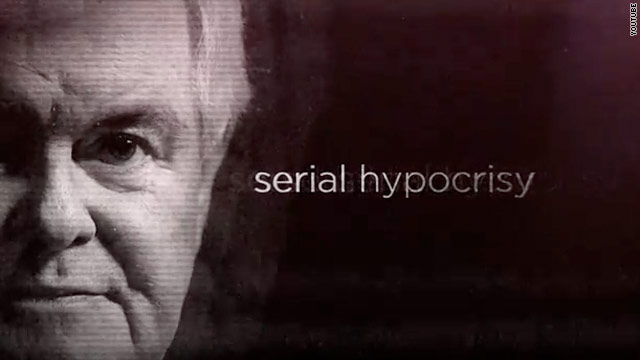 (CNN) - Rising GOP presidential hopeful Ron Paul will take his attacks against Newt Gingrich to the Iowa airwaves this week.

Paul's campaign is set to release a shorter version of a 2 1/2 minute ad that debuted online last week and quickly gained traction for framing Gingrich as a flip-flopper and Washington insider.

The new 60 second TV spot, titled "Serial Hypocrisy," includes footage from the news media, coupled with dramatic music, in an attempt to show inconsistencies in the former House speaker's record.

The ad spotlights a recent controversy over reports that Gingrich received a paycheck of at least $1.6 million from Freddie Mac while he served as a consultant for the mortgage giant.

The video also points to previous comments Gingrich made expressing support for an individual health insurance mandate. While he has repeatedly insisted he opposes a federal mandate, he favors easing into a government-backed system in which every person is covered.

The ad will start airing in Iowa on Wednesday as part of an expanded buy with another new ad that came out Monday, titled "Big Dog."

Along with Gingrich, Paul has seen his numbers rise in Iowa over the last month. Gingrich topped the field in three recent polls measuring support in the Hawkeye State, but Paul found himself in stiff competition with fellow candidate Mitt Romney for second place, with both polling between 16% and 18%.

"We wanted to ensure this ad reached as many voters as possible, to debunk the myth that the Newt we are seeing on the 2012 campaign trail is the conservative he has been touted to be all along," said Paul's national campaign chairman, Jesse Benton, in a statement.