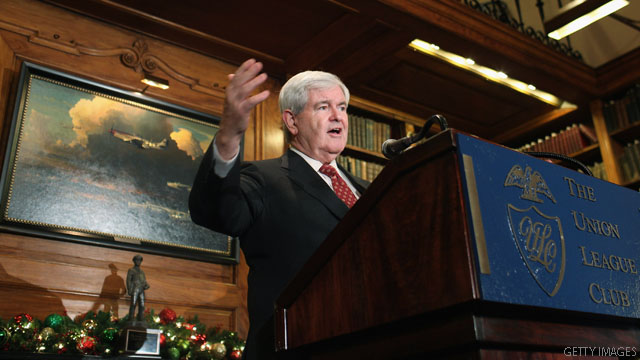 (CNN) – Newt Gingrich received the top spot in a new poll of likely primary voters in South Carolina, the latest example of the presidential candidate's surge.

The Winthrop Poll released Tuesday showed the former House speaker leading the pack with 38.4% support, followed by former Massachusetts Gov. Mitt Romney 21.5%, Texas Gov. Rick Perry with 9%, former pizza executive Herman Cain, who has since suspended his campaign, with 6.6% and Rep. Michele Bachmann of Minnesota with 5.4%. The other candidates obtained less than 5% support.

The new survey stands in sharp contrast to a similar poll taken in September when Gingrich garnered 5.3% support in the state. At the time Perry came in first with 30.5% compared with Romney's 27.3% and Cain's 7.7%.

Since September Perry's poll numbers steadily decreased and Cain was dogged by sexual accusations. Although the poll was taken before he suspended his campaign Saturday, Cain's drop is evidence the claims took a toll on the candidate in South Carolina, the third state and first Southern state to vote on the road to the White House.

Opinions of the tea party movement in the Palmetto State may also be on the wane, according to the poll. Over 83% of Republicans in the state said they do not consider themselves members of the nearly three year old grassroots movement, a jump from the 67.8% who responded the same way in September. Separately, 61.4% of GOP respondents said they approve of the tea party, while almost one-in-four Republicans said they were not familiar enough with the movement to have an opinion.