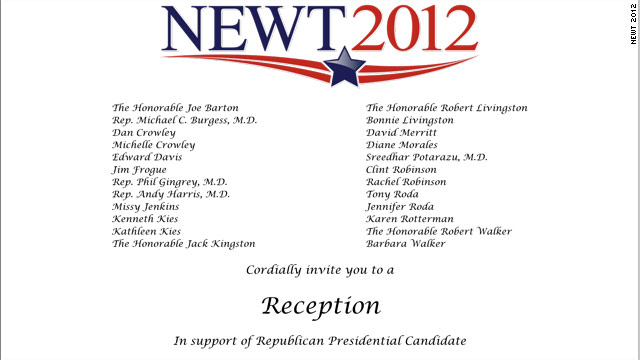 Washington (CNN) – Former House Speaker Newt Gingrich is hoping to mine his frontrunner status to help fill his cash-strapped campaign coffers with a major fundraiser Wednesday night in Washington.

Organizers of the event include former congressmen Robert Walker and Bob Livingston as well as several other Washington supporters. Livingston tells CNN several current members of Congress are expected to attend the event as well as backers not just from the Washington area but from other parts of the country.

"There is an enthusiasm out there," Livingston tells CNN. And Walker says the Wednesday event, being held at a downtown restaurant and put together in about a week, will be a "full house … a very large crowd."

The $1,000 a person event is Gingrich's fourth fundraiser in three days. Earlier this week, he met with high-profile donors and attended three fundraisers in New York City. The campaign is also scheduling other fundraisers in the coming weeks as it quickly ramps up.

Gingrich, who currently has a large lead in three of the early voting states, acknowledges his effort is way behind Mitt Romney financially and organizationally but also says his team has advantages which will help it be nimble.

"We run a very decentralized campaign. The two top people in our finance operation have not seen each other for 11 months, and actually got together today here in New York, and it didn't affect them at all because they know what each other look like, they're able to call each other as often as they want, email each other you know 400 times a day, and the system works," Gingrich said Monday in New York.

Gingrich's team won't say how much money it has raised since their candidate's ascent. Last month spokesman R.C. Hammond told CNN it had brought in $4 million since Oct. 1.

Rep. Jack Kingston, R-Georgia, who has endorsed Gingrich, has been urging people to attend the event, his first Washington fundraiser.

In an email solicitation to supporters Wednesday, campaign manager Michael Krull dismissed reports they were struggling to catch up: "The media has written many stories claiming that this campaign doesn't have the organization or resources to air television ads, but thanks to your generous support we are proving them wrong. Thanks to the generous support of people in all fifty states, this campaign is firing on all cylinders and steamrolling towards the Republican nomination."

The campaign is also trying to recruit former supporters of Herman Cain, and Livingston tells CNN several donors who have backed Rick Perry say they are going to switch their allegiance to Gingrich.
Gingrich went up with his first television ad this week. The biographical spot is airing in Iowa with a modest buy, but his campaign is banking on a lot of free media to help push his message.

In late October, just as his popularity began to rise, Gingrich acknowledged the challenge he'll have competing with only a fraction of Romney's war chest.

"Between you and me, I would like to not have Governor Romney notice me for at least another month because the truth is I don't have the money to compete with him in an ad war, but I can more than compete with him on talk radio and in meetings like this and in debates," Gingrich said on Oct. 28, speaking to voters in Greenville, South Carolina.

Gingrich's campaign is currently beefing up its staff as it faces filing deadlines and other organizational demands with the first voting less than a month away.

"We are way behind the eight ball considering Romney has been working at it" for years, Livingston says. "We've got a long way to go."

"We are gearing up to be competitive," adds Walker.

Also complicating Gingrich's efforts is more than $1 million in debts he reported in September. His campaign has said with its flow of cash it is now paying them off.