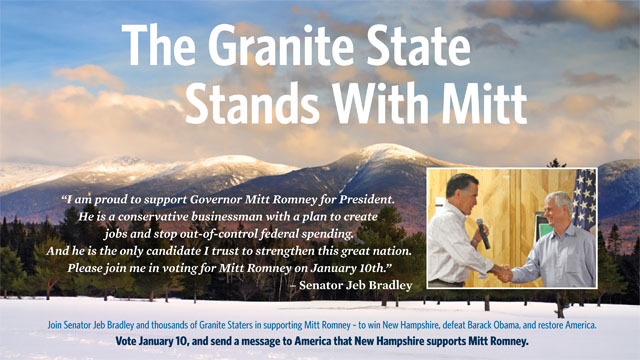 Romney doubles down in N.H.

Minneapolis, Minnesota (CNN) - Mitt Romney is doubling down in New Hampshire with another visit to the state Sunday and a new batch of targeted direct mail.

The campaign will send New Hampshire voters a postcard featuring Sen. Kelly Ayotte - who was perhaps the most sought after politician in the state and endorsed Romney in November - as well as a picture of Romney with one of ten local officials.

The pictures of officials who backed Romney include state senators and sheriffs and will be targeted to the area each represents.

"The Granite State stands with Mitt" is printed on the cards over a soaring photo of the state's mountain range.

The efforts build upon Romney's visit last week to the state, when the campaign turned out hundreds of volunteers and made thousands of phone calls. That same weekend a poll showed Romney's strength in New Hampshire had dipped a few points as former House Speaker Newt Gingrich continued to gain support.

As Gingrich has surged, Romney has sought to convince supporters he is not taking their support for granted.

"This is a primary to be won by the person willing to put in the effort, and use the shoe leather to get the job done, and I intend to give them a close look," said Romney on his last visit, when he spent about 45 minutes door knocking in Manchester.

His campaign meanwhile, has promoted its painstaking organization in New Hampshire, where voters head to the polls Jan. 10.

Romney will host a town hall at 4 p.m. ET Sunday in Hudson.