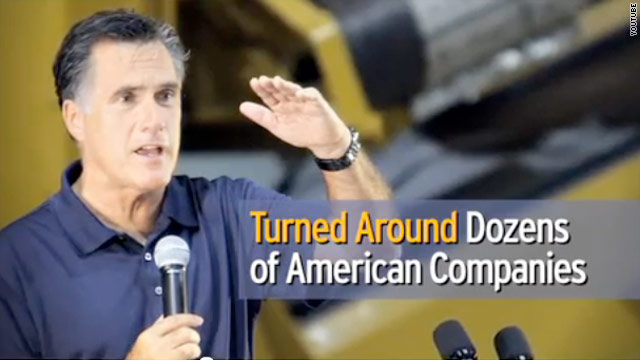 Washington (CNN) - As Mitt Romney's campaign turned its focus to Newt Gingrich, a political action committee supportive of Romney is keeping its fire trained on President Barack Obama in a contrast ad released in Iowa Thursday.

The super PAC "Restore Our Future" announced the ad is the start of a major $3.1 million campaign in Iowa that aims to both attack Obama and also tout Romney's business and political record.

"How many jobs did Barack Obama create as a community organizer? As a law professor? Maybe now you see the problem," says the narrator.

The committee, which cannot coordinate its activities with the Romney campaign, uses similar themes in trying to burnish his record in a state where he has faced political hurdles.

A CNN/Time ORC International Poll of likely caucus goers showed Romney trailing Newt Gingrich 33% to 20%. In that survey Romney finds himself doing worst among men and those under 50. Also those who considered themselves conservative supported Gingrich over Romney by a 2-1 margin, and those who said they were born again Christians supported the former House speaker 31% to 13% for the former Massachusetts governor, who is a Mormon. Those numbers show why Romney and his allies are trying to emphasize his business and leadership skills, as evidenced in the newly released super PAC commercial.

"Mitt Romney turned around dozens of American companies and helped create thousands of jobs. He rescued an Olympics hit by scandal. Took over a state facing huge deficits – and he turned it around without raising taxes, vetoing hundreds of bills," the ad states.

Romney has tip toed around whether to fully campaign in the Hawkeye state. In 2008 he spent $10 million there and came in second in the caucuses. On Wednesday his team put up its second advertising in the state. He held a tele-town hall with supporters earlier this week and is campaigning there on Friday in advance of a debate on Saturday in the state.

In response to the ad, Obama re-election spokesman Ben LaBolt said in a statement "Before he was a politician, Mitt Romney was a corporate buyout specialist, eliminating jobs and bankrupting companies while pocketing hundreds of millions of dollars. Now, in the final days of the Iowa caucuses, his allies are riding to his rescue, spending millions of dollars in secret, undisclosed donations to promote a candidate who will put Wall Street profit ahead of middle class security."

However, Carl Forti, a board member with "Restore Our Future," said the campaign was not correct. "Once again, President Obama is wrong. He's confused his organizations. It's his outside group, Priorities USA, which is, to use his campaign words, 'spending millions of dollars in secret, undisclosed donations...' Restore Our Future is an FEC-registered PAC that fully discloses ALL of its donors."