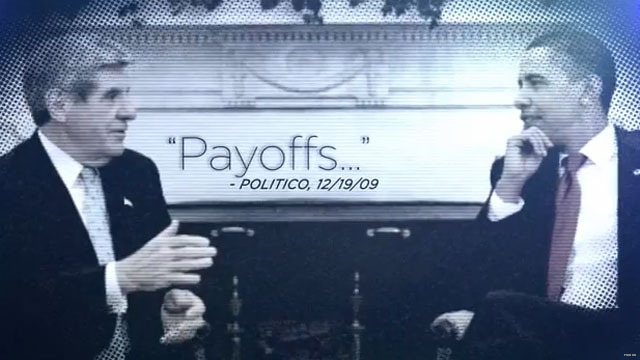 (CNN) – The conservative group Crossroads GPS is taking their fight to four competitive Senate battles with new ads airing in Massachusetts, Missouri, Montana and Nebraska, according to the independent organization.

The four spots expected to run for the next two weeks link the three incumbent Democratic senators to President Barack Obama and the leading Democratic candidate in a high profile Senate showdown as a product of Washington, D.C.

"He demanded a pay-off, accused of selling his vote, cynical what's in it for me type politics," the ad in Nebraska says. "Look at the damage he did- higher taxes, cutting Medicare spending and embarrassing Nebraska. Ben Nelson sold out to Obama when it mattered most."

The commercial targeting Senate candidate Elizabeth Warren of Massachusetts ties the former consumer protection advocate in the Obama administration to the bank bailout and "bigger government."

The ads are the latest efforts by Crossroads, which launched, with the help of Karl Rove, during the last election cycle to promote Republican candidates across the country. They have consistently released ads ahead of the 2012 elections. The new round that is part of a $1.2 million buy represents the second time the group has waded into state senate races in the last month. In November, they launched ads in Massachusetts, Missouri, Montana, Virginia and Nebraska.

Nonpartisan political handicapper Charlie Cook lists the four Senate races as "toss up." Stuart Rothenberg lists the races in Massachusetts, Missouri and Montana as "toss up" and the race in Nebraska as "toss up/tilt Republican." Nelson, the Nebraska incumbent, has yet to decide if he will run for reelection in 2012.

"I saw this in my race," Murray said Tuesday referencing the ads against her during the 2010 election. "I'm sitting here ... that kind of money didn't make a difference and I predict the same thing this year."