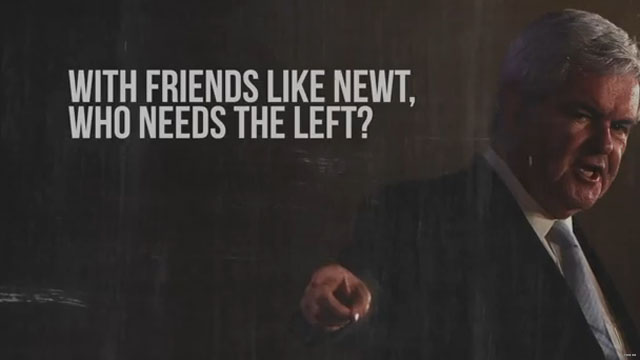 Des Moines, Iowa (CNN) - The Romney campaign stepped up its assault on Newt Gingrich Friday with a web video hitting the former House speaker for going against party orthodoxy in May.

Soon after he jumped into the race, Gingrich was asked about his thoughts on a plan proposed by Rep. Paul Ryan of Wisconsin to overhaul Medicare. Gingrich called the plan, which would institute voucher accounts for beneficiaries, "right-wing social engineering."

Public outcry from the party forced Gingrich to walk back his statement and eventually offer support for Ryan's proposal.

"About as harsh a criticism as one could level at a fellow Republican," Fox News' Brit Hume is seen saying in the ad.

Gingrich's comments about Medicare were one of the controversies that left his campaign in ruins last summer.

The video is the latest attack on Gingrich from the Romney campaign, which began to move yesterday to quell the growing success of the former speaker.

In response to a different attack ad posted Thursday by a political action committee supportive of Romney's candidacy, Gingrich's spokesman said such negative ads will not be effective.

"There's going to be an awful lot of them and none of them are going to work," said Gingrich Press Secretary R.C. Hammond.