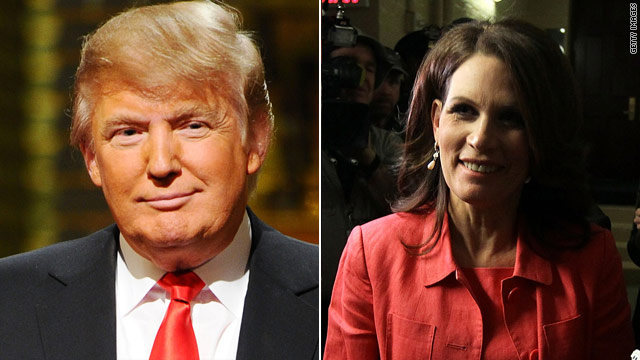 "You know who I'm very disappointed in? Michele Bachmann," Trump said Friday on "Imus in the Morning."

"She's come up to see me four times. Four times. She's called me, she's asked me for advice, she said she'd like to think about me for the vice presidency, all of these things."

Bachmann's campaign announced Thursday the Minnesota congresswoman would forgo the debate, which is sponsored by the conservative publication Newsmax. Only two candidates – former House Speaker Newt Gingrich and former Pennsylvania Sen. Rick Santorum – have said they will show up to the event.

On Thursday, Texas Gov. Rick Perry turned down "The Apprentice" host's invitation, saying he was too busy with retail politics in early voting states to participate. Perry was one of four candidates to visit Trump, ostensibly to ask him for his endorsement.

On Thursday, Trump told CNN's Wolf Blitzer he was surprised when former Massachusetts Gov. Mitt Romney turned him down.

"I was in particular surprised with Mitt Romney, because he wants my endorsement very badly, as you know," Trump said on "The Situation Room with Wolf Blitzer."

Trump said Bachmann's rejection was particularly insulting, pointing to a tele-town hall he held with the candidate in October.

"Most importantly I did like a two hour phone call for her with her people and it caused me certain problems," Trump said. "People asked if I was endorsing her, and the answer was no. And then after all of that, she announced she's not going to do the debate. It's unbelievable. You know, it's called loyalty. It's actually called loyalty. How do you do that? You know, it's amazing to me."

When Don Imus asked if Trump would proceed with the debate if only two candidates attend, the reality star said he wasn't certain.

"I don't know, I'd really have to look into it and see," Trump said. "They want me to drop my status as someone who's going to run as an independent, and I don't think I'm going to do that."