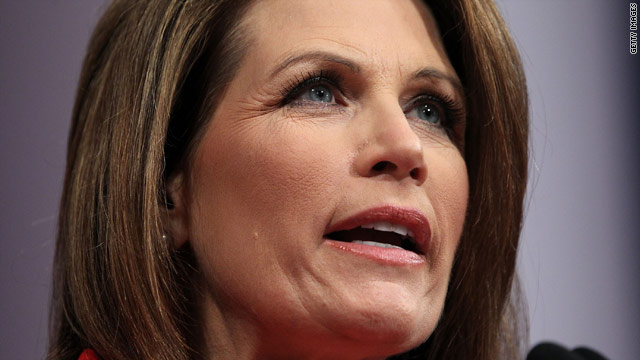 (CNN) - As the GOP presidential race heats up with more attacks and negative ads, Michele Bachmann on Saturday threw out a less-than-common word to amplify the political rhetoric, describing a few of her top rivals as "milquetoast."

"I must raise every available dollar between now and January 3rd to ensure our hard-charging constitutional conservative campaign – not some milquetoast opponents like Mitt Romney, Rick Perry and Newt Gingrich – wins over these undecided Iowa voters," Bachmann said in a statement to supporters.

Meaning "weak" and "spineless," the word originated as the name of a character - Caspar Milquetoast - in an early 20th Century comic strip by H.T. Webster called "The Timid Soul."

Bachmann, who experienced a brief surge in the GOP race after announcing her bid for president this summer, now polls in the single digits. On the campaign trail, she frequently boasts having a "titanium spine" when comparing herself to the rest of the GOP field.

"With so much on the line for our nation, struggling Americans deserve a consistent conservative to solve our economic problems and create jobs - not the same empty rhetoric offered up by my opponents and the Democrats," Bachmann said in her fundraising pitch.

The Minnesota congresswoman will face off against five opponents in an Iowa debate Saturday night.