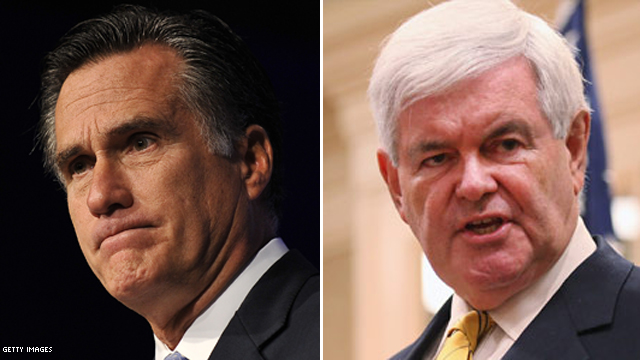 Romney to take on Gingrich at debate

(CNN) - Mitt Romney, who's watched opponent Newt Gingrich speed ahead to frontrunner status in the GOP presidential horserace, said he'll use Saturday night's presidential debate in Iowa to highlight his differences with the former House speaker.

"I'll be doing that tonight," Romney said during a surprise stop at his Iowa campaign headquarters in Des Moines on Saturday. "I'm sure we'll get plenty of opportunities to talk about our similarities and our differences."

The debate, hosted by ABC News and the Des Moines Register, will be the first showdown since Gingrich surged to the top of the polls and since former Godfather's Pizza executive Herman Cain suspended his campaign.

The last few days have seen a mounting tension between Romney and Gingrich, whose surrogates have openly gone after each other through conference calls and ads.

While the candidates themselves have largely avoided direct attacks this week, Romney on Friday gave a taste of some particular positions he takes issue with in regards to Gingrich's campaign.

In an interview with the Des Moines Register's editorial board, Romney said he disagreed with Gingrich on climate change, immigration and child labor laws.

The brewing rivalry first made waves last month, when in a radio interview, Gingrich boasted being "a lot more conservative" than Romney and criticized him as a flip-flopper.

The former Massachusetts governor quickly hit back, describing Gingrich in a TV interview as a "lifelong politician." It was a label that Gingrich quickly embraced.

Eyes will be on both candidates as they face off in a public setting Saturday night in Iowa, a state that holds the nation's first nominating contest. According to the latest CNN/Time/ORC International Poll, Gingrich leads the GOP pack in the state with 33% of support among likely Republican caucus goers, with Romney at 20%.