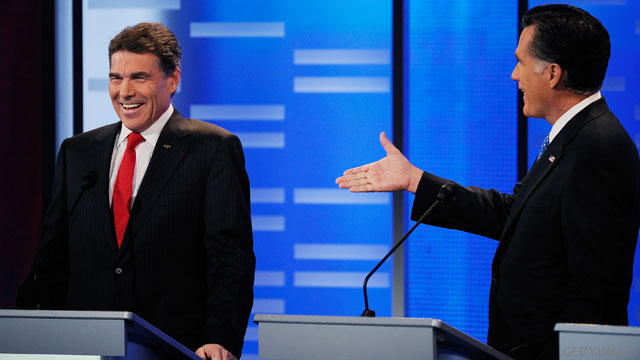 Romney's 'out of touch,' Perry says

The Texas governor said Romney’s proposed $10,000 wager during Saturday's debate is a sign the former Massachusetts governor is "a little out of touch with normal Iowa citizens."

"I was taken a little aback," Perry said on "Fox News Sunday." "I'm driving out to the station this morning. I'm sure I didn't drive by a house that anyone in Iowa would even think about that a $10,000 bet was possible."

Romney challenged Perry to the bet over Perry’s claim that he removed a section from his book, “No Apologies,” which voiced support for a national health care mandate.

"I'm not in the betting business," Perry responded.

Perry held firm Sunday, saying, "The issue of individual mandates is still at the center here and Mitt can deny this as many times as he wants."

Romney has repeatedly defended the health care plan passed in Massachusetts as a state experiment, not necessarily meant for the entire country. The individual mandate in the current health care law is at the heart of Republican criticism of the measure.

"The right course for America - and I've said this during the debates last time around; I'll say it now and time again - is to let individual states - this is a remarkable nation," Romney said Saturday. "This idea of federalism is so extraordinary. Let states craft their own solutions. Don't have ‘ObamaCare’ put on us by the federal government."

The bet became a popular topic on Twitter after the event and Democrats quickly attacked Romney as out-of-touch with struggling Americans, a consistent point of criticism toward the top-tier candidate and former business executive.

Rival candidate Jon Huntsman, who did not participate in Saturday's debate, created a website, 10kBet.com, that seeks to explain why "Mitt Romney Owes Rick Perry $10,000," complete with articles, video and tweets.

But Romney strategist Eric Fehrnstrom equated Romney’s proposal to a typical bet with friends intended to combat a “false attack.”

“Usually the sum of your bet depends on how strongly you feel about the rightness of your position,” Fehrnstrom told reporters after the debate. “So when Mitt Romney made that bet, he did so knowing that Rick Perry wouldn’t take it, and by backing down Rick Perry looks weak.”