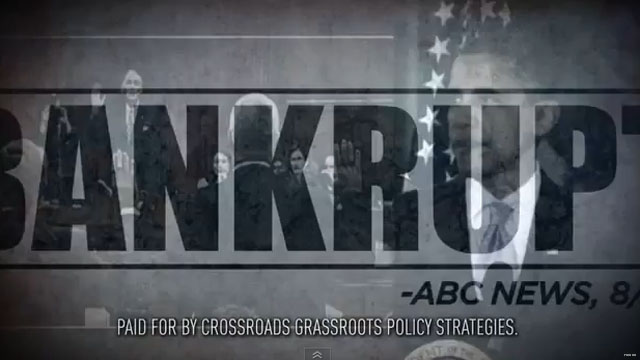 (CNN) – A Republican-leaning independent group will attack the Obama administration over its connection to Solyndra, the now-bankrupt solar energy company, in a new ad airing Monday.

The spot from Crossroads GPS is set to run for the next week nationally and says the company is an example of "cronyism" in the White House.

Solyndra secured a half-billion-dollar loan guarantee from the federal government, the first such company to receive a loan under the stimulus program to encourage green energy. They filed for bankruptcy in September.

"Obama gives his supporters at Solyndra a $535 million loan even though its business plan is risky," the ad says. "Solyndra goes bankrupt, the FBI is investigating and who pays the bill? We do. No jobs, just more red ink."

The current administration has defended the loan restructuring to the company, backed by a major Obama supporter, saying the infusion of cash postponed its downfall.

A memo from the political action committee said the new ad, which is part of a $500,000 cable television buy, reveals the inherent downside of President Barack Obama's support of "government as a guarantor of economic prosperity and fairness."

Crossroads launched during the 2010 election cycle with the help of Karl Rove to promote Republican candidates across the country. Although they have released ads in early voting states and sites of competitive Senate elections ahead of the 2012 elections, Monday's offensive is part of a new effort to strike the president's record.