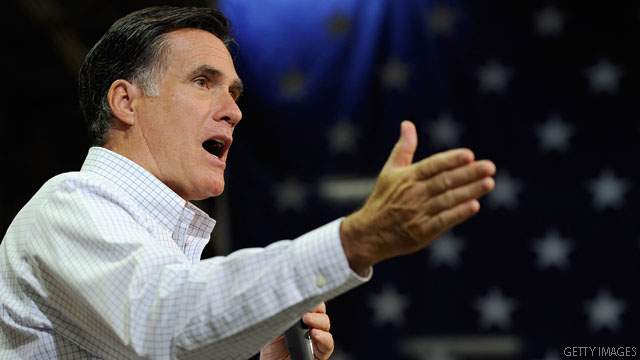 The former Massachusetts governor told members of the press at Madison Lumber Mill "there's no whining in politics" and seemed to accuse Gingrich of saying "outrageous or incendiary" things in a short-sighted attempt to build support.

Gingrich, who has maintained he will run a persistently positive campaign, took a swing at Romney at an earlier appearance in Londonderry, betting $10 the former governor would not return the money he'd made at his venture capital firm.

The jibe hit Romney as he tries to combat an impression he is out-of-touch with ordinary Americans, after acknowledging in a Saturday debate he had grown up wealthy and then offering his opponent a $10,000 bet.

At his afternoon event Romney repeated his call from earlier that day for Gingrich to return the seven-figure compensation the former speaker received for his work with mortgage giant Freddie Mac.

A reporter asked Romney if voters might see Gingrich as better-suited to take on President Obama because of his perceived reputation for throwing sharp elbows.

The former governor suggested he himself would be more likely to unite voters in a general election.

He would not rule out the possibility of running negative advertisements in the future, despite an insistence by the Gingrich campaign that the former speaker will avoid doing so.

"This is, after all, politics. There's no whining in politics," he said. "You get in a political process and you fight hard and describe the differences between yourself and other candidates."

During his Madison town hall, Romney was asked by a voter if he was out-of-touch with the lives of many Americans.

Romney pointed to the ten years he served as a pastor at his church, where he counseled people and aided those in financial need.

"What impressed me was that we're all the same in the things we aspire for, the things we love - our families, our faith, our country," he said. "When people are out of work, when people don't have a job and they don't feel they're contributing to the betterment of their family and their future, they get pretty depressed."

He continued: "Being out of work for a long period of time is pretty tough. And it's not the fault of the person who is out of work. Overwhelmingly, it's the fault of our economy."