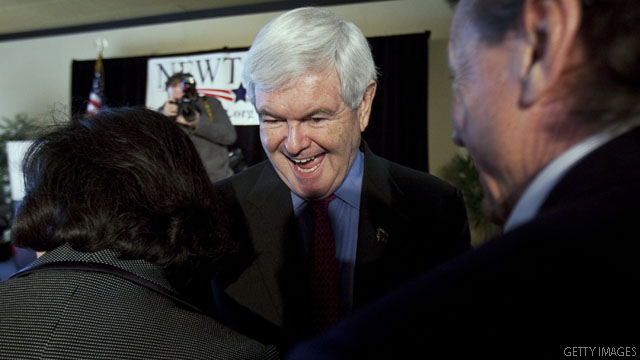 According to an American Research Group, 22% of likely Republican caucus goers in Iowa say they support former House Speaker Newt Gingrich for their party's presidential nomination, with 17% saying they back former Massachusetts Gov. Mitt Romney and 17% supporting Rep. Ron Paul of Texas.

The survey indicates Texas Gov. Rick Perry at 13% support, with Rep. Michele Bachmann of neighboring Minnesota and former Sen. Rick Santorum of Pennsylvania, each at 7%. Bachmann and Santorum have been criss crossing the Hawkeye State.

The survey, released Monday with just over three weeks to go until Iowa's Jan. 3 caucuses, also indicates former Utah Gov. and former ambassador to China Jon Huntsman at 5%. Huntsman has been spending almost all of his time campaigning in New Hampshire, which holds its primary one week after Iowa.

Twelve percent questioned say they are undecided. The poll was conducted Dec. 8-11, after businessman Herman Cain suspended his presidential campaign and before and after Saturday night's GOP debate in Iowa.

Perry has jumped eight points from ARG's November survey, when he was at 5% support. Gingrich was at 27% in ARG's November poll, with Romney at 20% and Paul at 16%.

The survey was one of two released Monday.

According to a University of Iowa Hawkeye Poll, 30% of likely Republican caucus goers in Iowa say they support Gingrich for their party's presidential nomination, with 20% saying they back Romney and 11% supporting Paul.

The survey indicates that 9% say they support Bachmann, with 8% backing Perry, 5% supporting Santorum and Huntsman at 1%. Around 4% had said they were backing Cain, who suspended his campaign while the poll was being conducted.

According to the University of Iowa survey, Gingrich's margin over Romney is smaller among "very likely" caucus goers, but larger among those "somewhat likely" to attend the caucuses.

"Gingrich faces at least two obstacles according to our data," says Fred Boehmke of the University of Iowa. "His run at the top may be starting to tail off as it has for previous front-runners. He also faces the challenge of turning out his supporters on caucus night, which will be critical since the gap between him and Romney is narrower among 'very likely' GOP caucusers and 'strong' Republicans."

The poll indicates that Gingrich's support is more than double Romney's among those who say they're backers of the tea party movement.

"Gingrich has become the tea party candidate in this race, and this bodes well for him," says the University of Iowa's Caroline Tolbert says. "Turnout of Tea Party supporters on caucus night could be key to his success in the state."

The American Research Group poll was conducted by telephone, with 600 likely Iowa GOP caucus goers questioned. The survey's sampling error is plus or minus four percentage points.

The Hawkeye Poll was conducted by the University of Iowa from Nov. 30 to Dec.7, before Saturday's debate in the Hawkeye state, with 277 likely Iowa Republican caucus goers questioned by telephone. The survey's sampling error is plus or minus six percentage points.