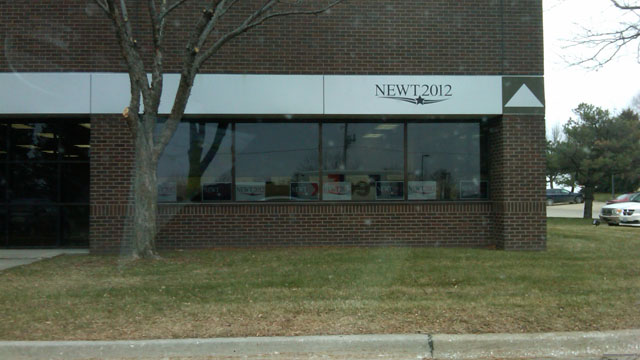 Urbandale, Iowa (CNN) - Newt Gingrich's numbers in the latest polls may be fat, but his campaign headquarters in Iowa is quite lean.

The Gingrich HQ consists of just a couple rooms located in an office park in suburban Des Moines. Blink and you might miss it.

But that's fine with the Gingrich campaign.

"Newt Gingrich has been a great fan of stronger, faster, leaner, more efficient, more effective," says Katie Koberg, the main campaign spokesperson in the Hawkeye State. "So it's not the number of staff you can hire or the number of offices you can open, it's about who's most effective."

With three weeks to go until the Jan. 3 caucuses, which kick off the presidential primary and caucus calendar, Koberg says there are eight paid campaign employees in Iowa, with 15 to 20 full-time volunteers, plus another 35 to 40 part-time volunteers. All of them work out of the Urbandale location, which is the campaign's only office in the state.

"We're at a great staff level right now. If we need to hire more staff, we will," adds Koberg.

Conventional wisdom dictates that it takes a strong staff to get your supporters to the nearly 2,000 caucus sites across Iowa in the cold and dark of a winter night. Strong organizations in the state helped Bob Dole capture the 1996 GOP caucuses and made former President George W. Bush a winner in Iowa four years later. During the last cycle, Barack Obama's superior get out the vote efforts in Iowa helped him beat rival Hillary Clinton in the Democratic caucuses. But it was a different story on the Republican side. Mitt Romney's superior organization wasn't enough to put him over the top, as former Arkansas Gov. Mike Huckabee, with a tiny staff in the state, captured the caucuses.

But she says that her best weapon when it comes to motivating Gingrich supporters to head to the caucus sites is her candidate.

"Our best get out the vote effort is our candidate, who delivers a great message. Newt Gingrich makes our lives much easier by being able to deliver a message and by being a likable guy," adds Koberg.

Koberg and another senior Iowa staffer left the campaign in early summer. At the time Gingrich's bid for the White House was on life support. After a number of stumbles and controversies surrounding the candidate, a bunch of top national staffers and advisers jumped ship, and the campaign coffers were in the red. But thanks to strong debate performances in the summer and autumn, and thanks to stumbles from other GOP rivals, such as Rep. Michele Bachmann of Minnesota, Texas Gov. Rick Perry, and businessman Herman Cain, who recently suspended his campaign, Gingrich's poll numbers began to skyrocket.

Koberg and the other senior staffer in Iowa rejoined the campaign earlier this fall, and the campaign HQ opened at the end of November.

Koberg says volunteers have arrived from as far away as Texas, with one of them saying "we heard you needed boots on the ground. We're boots and we're on the ground."

The volunteers have helped set up the office, assisted in building the organization and made calls to energize Iowa supporters.

Gingrich has touted that he has the largest presidential campaign organization in South Carolina, the first Southern state to vote, and top campaign aides say they have a strong structure in New Hampshire, which holds the first primary. But the organization in Iowa appears much more modest.

The Gingrich campaign says they brought in $4 million in fundraising nationally from the first of October through mid-November, and the campaign recently went up with their first paid ad in Iowa.

But the big question is whether Gingrich can capitalize on his soaring poll numbers and rising fundraising figures.