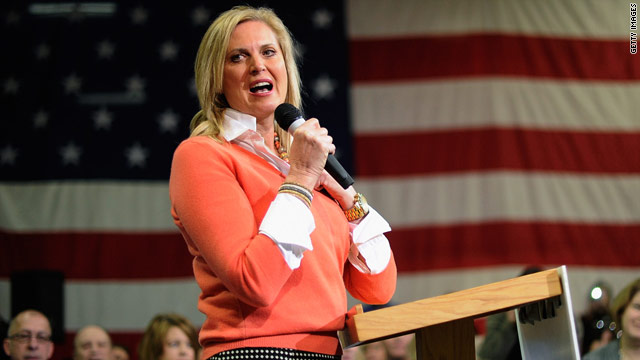 Council Bluffs, Iowa (CNN) - Ann Romney said Wednesday that her husband’s presidential campaign is bracing for a protracted Republican primary fight that could become a race for delegates extending well into the spring.

Romney was echoing comments made by her husband, former Massachusetts Gov. Mitt Romney, earlier in the day.

Recognizing that an unexpectedly strong challenge from Newt Gingrich may force him to campaign beyond the first four nominating states to clinch the nomination, Romney told Fox News that the primary process “may take just a few weeks, but it may go on for months.”

His wife was on message Wednesday as she courted potential caucus-goers in western Iowa.

After a 10-minute speech that focused on her husband’s values and devotion to family, Ann Romney veered into a lecture about the byzantine delegate rules that were enacted by national Republican officials in the summer of 2010 to govern the presidential nominating process.

“The Republican National Committee changed the rules on us this time, which means everything is going to be stretched out longer than it has in the past,” she said, sounding more like a political strategist than political spouse. “Last time, the states were winner-take-all, a lot of them were. This time, it’s proportional. It’s done deliberately to make the process last longer. So we are planning on whatever it’s going to take for however long it takes. We are ready to do it. We are organized.”

Romney is in the midst of a tour of Iowa and New Hampshire living rooms, where she tells audiences about her personal struggles with breast cancer and multiple sclerosis.

She speaks about the “personal side” of Mitt Romney and his devotion to his wife and family - “The side you haven’t maybe heard,” as she explained in Council Bluffs.

The itinerary is implicitly aimed at contrasting the Romney’s sturdy 42-year marriage with the rocky personal life of Gingrich, who has been married three times.

Romney said that as president, her husband will have “the character and the integrity to make us proud and to trust him.”

“The motto that our family lived by when Mitt was in the home and we were working doing everything is, no other success can compensate for failure in the home,” she added.

Candidate Romney has been criticized by some Iowa supporters for not spending more time campaigning in the state ahead of the January 3 contest.

As she left the event, Ann Romney was asked by a reporter if her husband would step up his Iowa politicking.