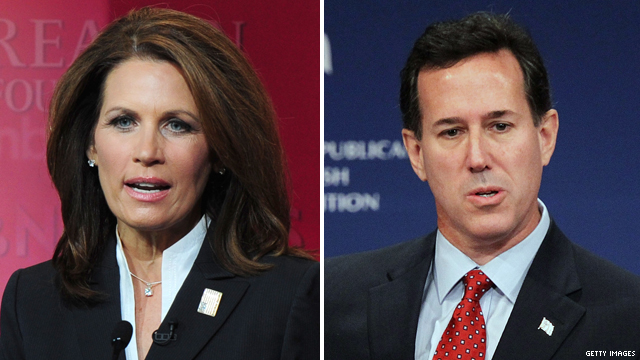 The candidates are widely known as two of the most vocal social conservatives in the GOP presidential field, and Bachmann made headlines last month when she said she would consider Santorum as a possible running mate.

But on Tuesday, Santorum, a former congressman and two-term senator, opened up a new line of criticism against the Minnesota congresswoman, saying she lacks what it takes to unseat President Barack Obama next year.

"It's not like she's ever had ... any record of success of attracting the kind of voters that we need if we're going to win this election," he said at a campaign stop in Iowa. "I think she has a lot going for her, but ... we've gone through now a president with very limited experience. It's not working out real well for America."

Bachmann sharply disputed his claim on Wednesday. Citing her election wins in the left-leaning state of Minnesota and her conservative voting record on issues surrounding abortion and marriage, Bachmann boasted being a true conservative and the most electable against Obama.

"I have great respect for Rick Santorum, but I have a very strong level of accomplishment," Bachmann told CNN Chief National Correspondent John King.

Both candidates, who poll in the single digits, will face off on stage Thursday night in the final Republican presidential debate before the Iowa Caucuses on January 3.