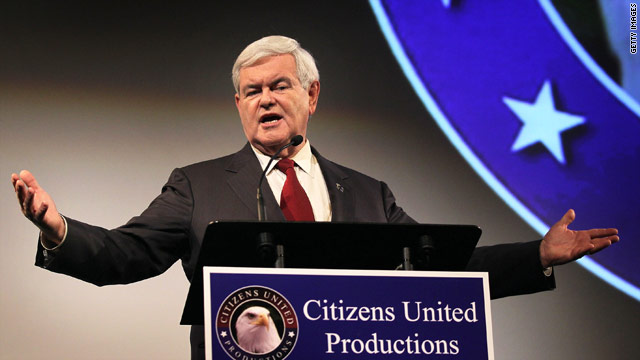 (CNN) – An influential conservative magazine announced its “anti-endorsement” on Wednesday, urging voters to exclude a handful of Republican presidential candidates from their consideration.

The editorial board of National Review most strongly came out against former House speaker Newt Gingrich, who’s quickly seized the top spot in the GOP presidential horserace.

While the editors admitted Gingrich has made an “amazing comeback,” given his uncommon marriage history and near-death campaign experience earlier this year, they insisted his narrative as a nominee would be more damaging than productive for the Republican Party.

“If he is the nominee, a campaign that should be about whether the country will continue on the path to social democracy would inevitably become to a large extent a referendum on Gingrich instead,” the article states.

The editors cited what they considered a number of character flaws for Gingrich while he was speaker - “his impulsiveness, his grandiosity, his weakness for half-baked (and not especially conservative) ideas” - and argued they have little reason to believe he has changed.

“Gingrich has always said he wants to transform the country. He appears unable to transform, or even govern, himself. He should be an adviser to the Republican party, but not again its head,” they wrote.

Instead, National Review suggested voters take a second look at Utah Gov. Jon Huntsman, who’s struggled to make big gains in national polls. The magazine rates him as someone with a “solid record” despite his “apparent inability, so far, to forge a connection with conservative voters outside Utah.”

In the last election cycle, the magazine endorsed former Massachusetts Gov. Mitt Romney, and again offered support for the candidate this time around, saying “he would make a fine president.” But it ceded that “time and ceaseless effort have not yet overcome conservative voters’ skepticism about the liberal aspects of his record.”

Former Pennsylvania Sen. Rick Santorum also won the magazine’s support. The editors praised his experience as a legislator, serving two terms in the Senate in addition to two terms in the House of Representatives.

But in the end, the magazine pushed readers to ask themselves which candidate would most likely defeat Obama and concluded with one final swing at Gingrich.

“At the moment we think it important to urge Republicans to have the good sense to reject a hasty marriage to Gingrich, which would risk dissolving in acrimony,” the editors wrote.