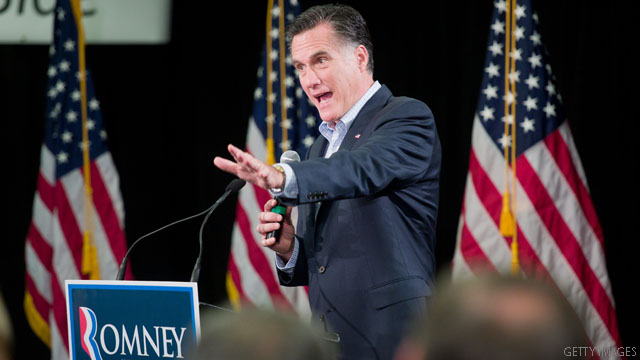 (CNN) – As a not-so-warm welcome for Mitt Romney to New York City as he attends fundraisers Wednesday, the Democratic National Committee will hire an airplane to graze near the city's skyline with a giant banner blasting the GOP presidential candidate.

The 175-foot sign, which reads "Bet You 10k Romney's Out of Touch," swipes Romney over a controversial bet he tried to make with Texas Gov. Rick Perry during Saturday's debate.

The plane is scheduled to circle for several hours around lunchtime over the Hudson River. The trailing banner also points viewers to a new website, Mitts10KBet.com, which the group launched Monday to call attention to Romney's wealthy background.

Romney made the remark Saturday after Perry claimed that the former Massachusetts governor had removed a line about health care from his book. In a heated moment, Romney tried to bet Perry $10,000 that the Texas governor was wrong but Perry refused to take the bait.

The incident became one of the most talked about moments of the night, and Democrats have since used it as part of their attack strategy against the candidate, who until recently was topping the GOP presidential field.

"Offering to make a bet with that kind of money in a nationally televised debate is just one more example of how tone-deaf Romney is to the needs of middle class Americans," said Melanie Roussell, DNC national press secretary.

Romney attempted to laugh it off Sunday, telling reporters in New Hampshire that his wife came up to him after the debate, kissed him and said, "There are a lot of things you do well. Betting isn't one of them.”

But Democrats have continued to hammer him over the comment.

"Today Mitt Romney's coming to New York to fundraise from some of the wealthiest Americans who, just like Romney, are probably used to making $10,000 bets on the golf course or in a corporate boardroom," Roussell said.

Romney's campaign has frequently been on the defense against the DNC this fall, arguing that national Democrats simply fear Romney will become the Republican nominee.

“The White House is so scared at the prospect of facing Mitt Romney in the general election, they are going to great lengths to try and tear him down. The last thing President Obama wants to do is run against a conservative businessman who has worked in the real economy and have to explain why his policies have been unable to get millions of Americans back to work. On the other hand, if Newt Gingrich is our party's nominee, then the choice in next year's election will be between two Washington insiders with no experience in the real world of job creation,” Andrea Saul, Romney's spokesperson, said Wednesday.