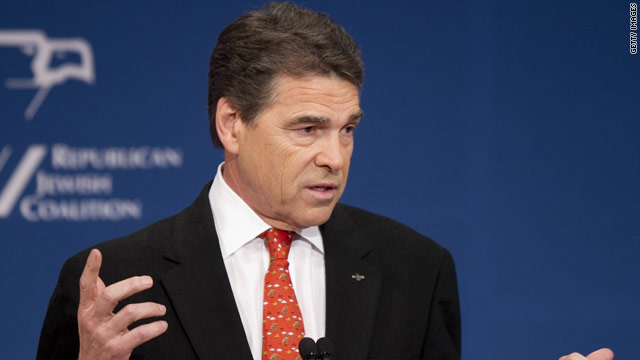 Harlan, Iowa (CNN) - During a tour Wednesday afternoon of Molded Products - a medical-equipment manufacturing facility in Harlan, Iowa - Rick Perry was asked by the company's owner, David Tyrrel, if he favored a proposal that would offer incentives to health care providers who accept money from the U.S. government to purchase equipment from U.S. manufacturers.

Tyrrel told Perry that he had raised the issue with Republican Sen. Chuck Grassley of Iowa and President Barack Obama when they visited his facility, but neither had done anything about it.

"I would consider it to be a good idea, and here's the reason why: foreign aid," Perry said, quickly changing the topic. "I'm for starting foreign aid at zero, and then you have a conversation about, 'Do you approve of our interests?' Now obviously when we start dealing with a global economy, we might have an ally somewhere that makes the same product as you do. That particular point in time is where you kind of get into the head-scratching side of it."

Tyrrel tried to explain that his company's biggest problem was foreign-owned companies in the United States who take federal dollars but then go on to import products from their home country rather than purchasing products made in America, despite competitive pricing and quality. So he tried to ask his question again to see if Perry could suggest any ways that government could encourage such companies to help domestic businesses instead. Perry again answered a different question.

"It's not unlike when we talk about why would we give our federal dollars to a country that's displaying regularly that they don't have America's interest in mind," Perry said.

At this point the governor was told by aides he had to leave. And even though Perry didn't really answer his question, Tyrrel graciously thanked him for coming, and then stood patiently by the door collecting safety goggles as the governor and his media entourage filed out.