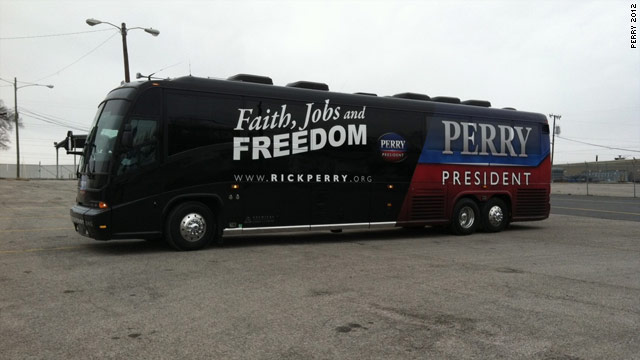 Neola, Iowa (CNN) - Welcome to the first day of Gov. Rick Perry's Iowa bus tour. With three stops across the Western part of the state Wednesday beginning with a town hall meeting in Council Bluffs, Perry kicks off a three-week trip around the Hawkeye State that will go right up until the caucuses on January 3.

While the campaign has yet to announce all of the stops, there are currently 47 events on the governor's schedule, including a mix of rallies, meet-and-greets, walks down Main Streets, lunches, fundraisers and even a few church visits.

Perry's schedule shows 30 meet-and-greets, where no questions will be asked, and eight town halls where voters will be able to press the candidate on issues.

Decked out in a wrapping that reads "Faith, Jobs and Freedom," Perry's bus will cover slightly less than 2,000 miles with the final event scheduled on the eve of the January 3 caucuses. Appropriately, the tour's final event will be a campaign rally in Perry, Iowa.