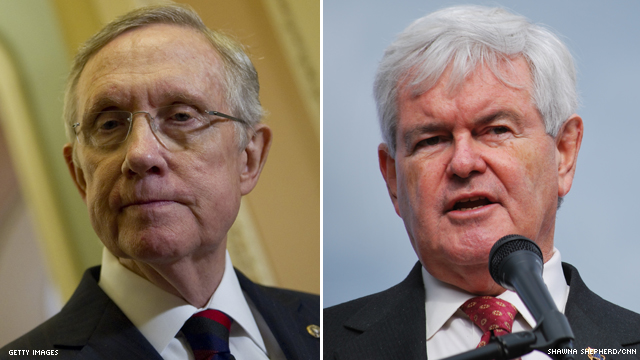 While arguing for a spending agreement to include an extension of payroll tax cuts, Reid invoked the candidate's previous life as speaker of the House.

"I think that everyone can see very clearly that my friends on the other side of the aisle obviously want to have the government shut down and as I've said before–I'll say again– they've had experience doing this," Reid said.

"The presumptive Republican nominee Newt Gingrich tried that once, it didn't work so well."

Gingrich has made no apologies for serving at the helm of a government shutdown in 1995 and 1996 as Democrats and Republicans squared off over balancing the federal budget during President Bill Clinton's second term.

"Everyone knows why the government is going to shut down, if in fact it does," Reid said. "We have 160 million Americans out there cheering for us, that we can get them the tax relief they deserve."

Reid argued the Senate should vote on a broad spending agreement to ensure that government funding continues after a short-term extension expires at midnight Friday.