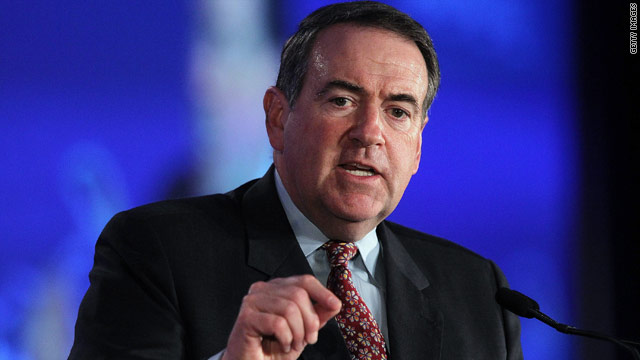 Des Moines, Iowa (CNN) – Television show host and former Arkansas Gov. Mike Huckabee praised the four presidential candidates who made it a "priority" to attend the premiere of his anti-abortion film in Iowa.

"It speaks volumes that they are here," said Huckabee, who won the 2008 Republican caucus in Iowa.

"In fairness, even the ones who did not come indicated their support for what we're doing tonight. Some had events," he said, referring to former Massachusetts Gov. Mitt Romney and Texas Rep. Ron Paul. "If there's anybody who understands you have scheduling conflicts you cannot overcome, I understand that."

Romney spent the day fund-raising in New York, and Paul was in New Hampshire hosting an evening town hall.

"But I do want you to take note that there were four candidates who cleared their schedules and made this a priority event," Huckabee said. "This event is not here to endorse a candidate, but I think it is significant that all four of the candidates who are here tonight have endorsed life."

Bachmann, the first candidate to speak, promised to be the "most pro-life president," if elected.

The audience erupted with applause when Gingrich said he would, among other things, bring back the so-called "right to conscience" policy issued under President George W. Bush. The policy shields employees at healthcare facilities from participating in medical procedures, such as abortion, if it's against their moral or religious beliefs.

Gingrich also mentioned his support for a controversial anti-abortion movement known as "personhood." Gingrich, Bachmann and Santorum have all signed the advocacy group Personhood USA's 2012 pledge.

Perry talked of his support for a human life amendment to the constitution.

Huckabee teamed up with the conservative non-profit group Citizens United to create the pro-life film.

"[The candidates] all have a thousand things to do but I hope that the fact that there are more than a thousand people to see them will make this worth their time for having come," he said.