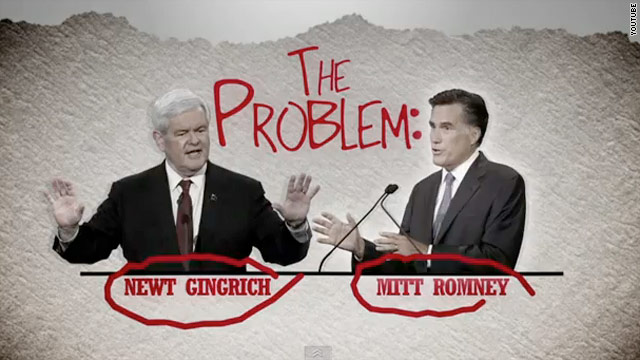 (CNN) – Mitt Romney and Newt Gingrich are both the same breed of Washington insider, according to a new television ad from Rick Perry's campaign released Thursday.

Airing statewide in Iowa and nationally on Fox News, the ad paints Perry's rivals as non-conservatives who voted to raise taxes and ignored soaring federal debt.

The ad goes on to suggest Perry's ideas and outsider status are leaving establishment candidates shaking.

"Rick Perry's plans to create jobs and overhaul Washington with a part-time Congress make him the outsider political insiders fear most," the narrator says.

In a statement accompanying the ad's release, Perry's communications director continued to knock Gingrich and Romney.

"The two current frontrunners for the Republican nomination support distinctly unconservative policies like government-mandated health insurance and federal bailouts," Perry Communications Director Ray Sullivan said. "As someone who has never served in Washington or been an establishment favorite, Gov. Perry is the one candidate with the record and reform plans to truly change Washington, D.C."

Perry, who raised nearly $17 million in the third fundraising quarter, has been rolling out ads in Iowa and on national cable for the past several weeks. The most controversial spot touted his socially conservative views, suggesting President Barack Obama was waging a "war on religion."

Since his large fundraising haul, Perry's poll numbers have dropped in state and national polls.