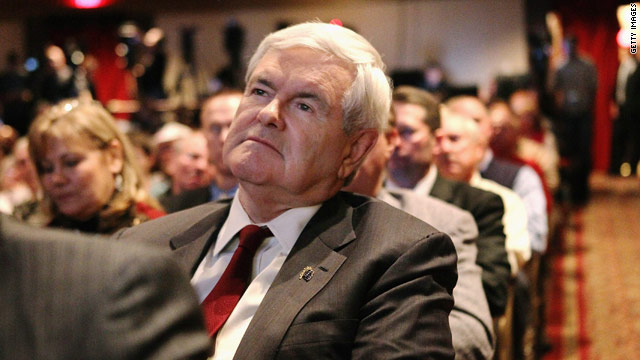 (CNN) - The avalanche of negative campaign ads from Mitt Romney is wearing on rival Newt Gingrich, but he said Thursday he won't break his pledge to stay positive.

Speaking to Iowa Public Television, the former House speaker said the onslaught of vitriol coming from Romney headquarters jarred with the spirit of the holidays.

"I think it's counterintuitive," Gingrich said. "We have an ad that will come up next week where Callista and I are wishing people a Merry Christmas, and we're talking in a totally positive way. I think if these guys keep up this kind of negative junk, it's so discordant with the spirit of Christmas."

Gingrich said his guarantee to remain positive was uncharted territory for presidential politics, and couldn't say for sure if his strategy would be successful.

"This is a real experiment," Gingrich said. "I can't tell you today, given the millions of dollars being spent on advertising, telephone calls, direct mail, all of it negative, I don't know at the end of the day if I'll be the frontrunner in Iowa, because there is a combined weight of negativity that weighs you down."

Political professionals are advising him to go negative, Gingrich said, but support from Iowa voters has convinced him to avoid attacks on his opponents.

"I'm getting two kinds of advice," Gingrich said. "The traditional consultants are all saying 'you have to hit back.' Citizens are walking up to me saying stay positive, have faith the people of Iowa will see through this."

"These are challenging and important times for America," Gingrich said in the spot. "We want and deserve solutions. Others seem to be more focused on attacks rather than moving the country forward. That's up to them."

Gingrich said in the interview fundraising comparisons between his campaign and Romney's would also be skewed in his rival's favor.

"I'll never have as much money as Mitt Romney can raise," Gingrich said. "That's a fact, and you have to start the campaign understanding that. On the other hand we run a campaign that's a lot less expensive, so there's a certain balance in that."

"If he can't carry New Hampshire, the race is over, in terms of his candidacy," Gingrich said.