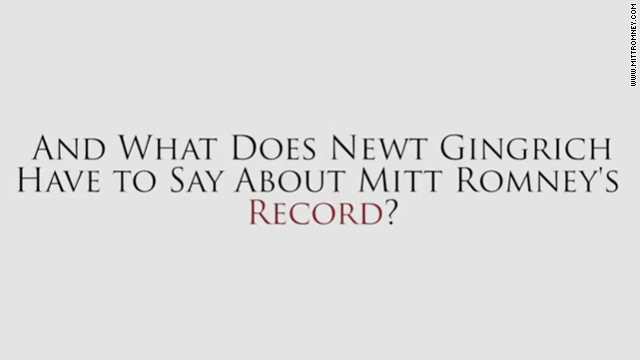 The former Massachusetts governor released a 30-second Web spot featuring praise of his record given by none other than his chief rival for the 2012 GOP presidential nomination, Newt Gingrich.

Romney's video opens with a scene from the former House speaker's introduction of him at the 2010 Conservative Political Action Conference.

"Gov. Romney, in his business career created more jobs than the entire Obama cabinet combined, so he could actually talk about it," Gingrich said.

Touting credentials including: "Conservative Businessman For Over 25 years," "Saved 2002 Winter Olympics," and "Eliminated Massachusetts $3 Billion Deficit," the video closes with a question: "What does Gingrich have to say about it?"

And the answer: a replay of the Gingrich soundbite.

The spot marks Romney's third web ad in two weeks and its release comes the same day as the last presidential debate before the first-in-the-nation Iowa caucus.