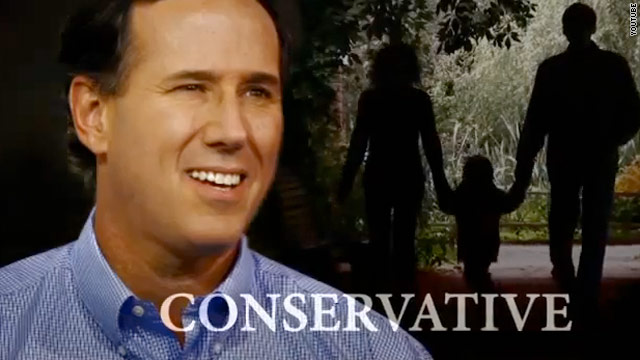 (CNN) - Rick Santorum is going up with the first TV commercial in his bid for the Republican presidential nomination.

A senior Santorum campaign aide tells CNN that the ad will run statewide in Iowa Thursday, hours before the final GOP presidential debate prior to the Hawkeye State's Jan. 3 caucuses. At the same time, a newly created independent super PAC supporting the former Pennsylvania senator's run for the White House says they are airing a spot on Iowa TV.

The campaign says the ad will run Thursday, prior to the debate in Sioux City, Iowa, and again next week through caucus day.

Meanwhile a new ad from the Red, White and Blue Fund describes Rick Santorum as the only "true conservative" running for the GOP nomination. Their 30-second spot is set to run for the next week in Iowa as part of a $200,000 buy, according to a website for the group.

"Who's the true conservative you can really trust? Rick Santorum," the ad says. "He's fought for conservative values his whole life, father, husband, a champion for life. A visionary that saw and understands the threat of radical Islam and a proven reformer who took on Washington and won."

Marston ran unsuccessfully in 2010 for circuit court clerk in Alexandria, Virginia and served as an assistant secretary at the Department of Education during former President George W. Bush's second term.