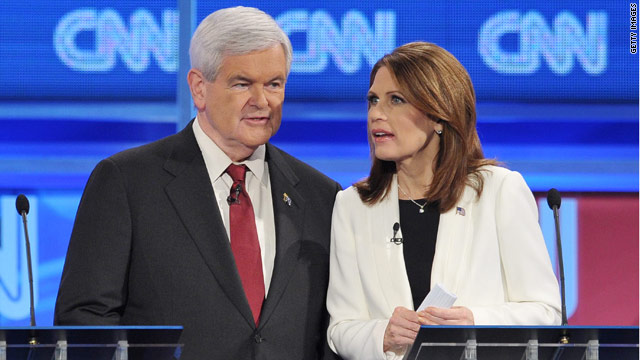 Sioux City, Iowa (CNN) – As Republican presidential candidate Michele Bachmann attempts to lump together rivals Newt Gingrich and Mitt Romney as less than conservative, her campaign went a step further late Thursday, suggesting Gingrich has changed positions based on who was paying him.

Bachmann campaign manager Keith Nahigian and spokeswoman Alice Stewart spoke with reporters in the "spin room" following a Republican presidential debate in Sioux City, Iowa, co-sponsored by the Iowa Republican Party and Fox News. It was the last GOP debate before the Jan. 3 Iowa caucuses.

"That's what she's trying to show: the difference between being a strong conservative and being a flying around conservative," he said.

Stewart reiterated Bachmann's insistence that she is the only "consistent conservative" in the GOP race.

"They're both one and the same," Stewart said of Gingrich and Romney. "When you're talking about all these issues that we've outlined when it comes to the (health care) individual mandate, they are the father and grandfather of the individual mandate. When it comes to immigration and the TARP and the bailout and several issues – they're one and the same."

As he's previously maintained, Gingrich said he "never lobbied under any circumstance."

"I want to state unequivocally, for every person watching tonight,” the former House speaker added. “I have never once changed my positions because of any kind of payment."

"The truth is I was a national figure who was doing just fine, doing a whole variety of things, including writing best-selling books, making speeches. And the fact is I only chose to work with people whose values I shared and having people have a chance to buy a house is a value I believe still is important in America."