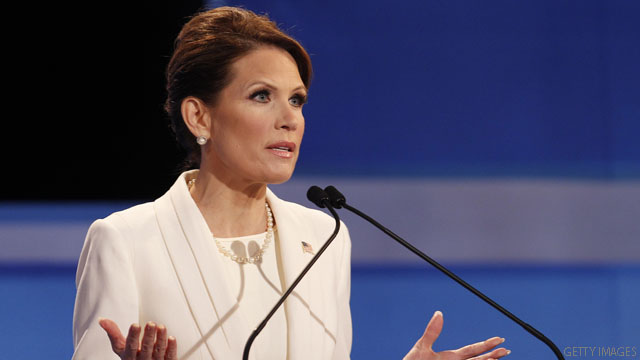 "Well, frankly, I thought that it was outrageous and insulting, the way that he seemed to treat me like I was a student and I'm not. I'm a serious candidate for president of the United States and I had my facts right and he has said this repeatedly and he's just not true," Bachmann said on CNN's "The Situation Room" Friday. "He's memory challenged."

The Minnesota congresswoman said she does not know if his comments stemmed from her gender, but said they were "condescending" and not befitting a fellow candidate.

During an interaction over their stances on abortion during Thursday's debate, Gingrich told Bachmann she sometimes "doesn't get her facts very accurate," a sentiment over which Bachmann disagreed.

She also told CNN's Wolf Blitzer that she was "disappointed" South Carolina Gov. Nikki Haley formally backed rival Mitt Romney Friday, before adding that she greatly respects the first-term governor. Bachmann met with Haley at her home in South Carolina ahead of the endorsement.

But even without her support, Bachmann said she is confident she will prove victorious in the Palmetto State, which hosts the first-in-the-South primary contest.

"We think with the cannon shot we're going to get out of Iowa that we'll do very well in South Carolina," Bachmann said.

If she were president and a U.S. drone crashed in Iran, as one did last week, Bachmann said she would "seek to obtain that drone." However, she would not provide further details because "it's not prudent to say as a president what I would do ahead of time."

"I wouldn't be ever communicating to the enemy what my intents will be and what level of force I would use, only to send the signal: Don't try it," Bachmann said. "If I'm president of the United States, don't even bother trying."