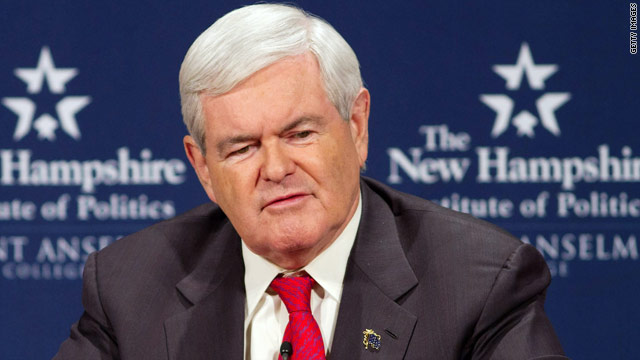 Sioux City, Iowa (CNN) – Less than three weeks before the nation’s first presidential contest, the campaign of Newt Gingrich acknowledged a potentially damaging criticism late Thursday: that the Republican presidential candidate’s own words sometimes get him in trouble.

Gingrich appeared with his rivals in the last Republican presidential debate before the Jan. 3 Iowa caucus. The Iowa Republican Party and Fox News sponsored the event.

At one point, Gingrich was asked about the impasse over the payroll tax extension.

“I sometimes get accused of using language that's too strong, so I've been standing here editing,” Gingrich told co-moderator Neil Cavuto, prompting laughter from the crowd.

“I'm very concerned about not appearing to be zany,” Gingrich added, a clear reference to Mitt Romney’s use of that word in a New York Times interview to describe Gingrich.

After the debate, reporters pressed Gingrich spokesman R.C. Hammond in the “spin room.”

Yet the spokesman did get serious.

“I think what he’s saying to voters is: if this is what you’re worried about, I hear you. If this is your concern going into the caucus - I’m up here being the president now on this stage that I will be in the White House.”

When pressed to explain Gingrich’s repeating the word “zany,” Hammond said, “I think the guy standing next to him got the message.”