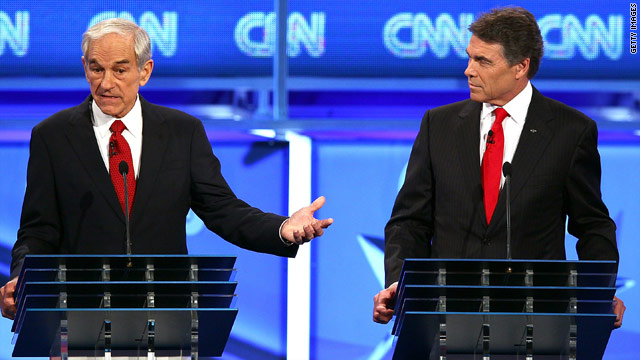 "I was really taken aback by the power of [Paul's] statement from the standpoint of allowing the Mullahs and a madman to come into possession of a nuclear bomb and that we should not care about that," Perry said on CNN'S "John King, USA."

Using the term "madman," Perry was referring to Iranian President Mahmoud Ahmadinejad, who in 2005 quoted a remark from Ayatollah Khomeini, founder of Iran's Islamic revolution, that Israel "must be wiped out from the map of the world."

The comment has fueled the primary argument for those who want to dismantle Iran's nuclear development.

At Thursday's debate, Paul stirred controversy on stage when he said U.S. sanctions against Iran were an "act of war" and praised President Barack Obama for "backing off on the sanctions," saying "it's going to be an economic calamity if you take all the oil out of Europe."

Instead, Paul, a strict non-interventionist, urged the government to use diplomats to resolve the situation.

Citing the report, Bachmann argued Iran was just months away from developing a nuclear weapon, a claim that Paul strongly disputed. The Texas congressman said Bachmann was "dramatizing" the report and argued the agency had no evidence of any "enrichment" of bombs.

"You cannot solve these problems with war," Paul said. "You can solve the problems if we follow our constitution and go to war only when we declare the war, win them and get them over with instead of this endless fighting and this endless attitude that we have enemy all around the world."

On Friday, Perry echoed Bachmann's line of attack against Paul.

"There should be no space between the United States and Israel, and I was just really taken aback by Dr. Paul's almost nonchalant statement," Perry told CNN Chief National Correspondent John King.

He added that he gets his information from "some pretty wise and plugged-in people," including former U.S. Ambassador to the United Nations John Bolton, who he said is "greatly concerned about Iran."