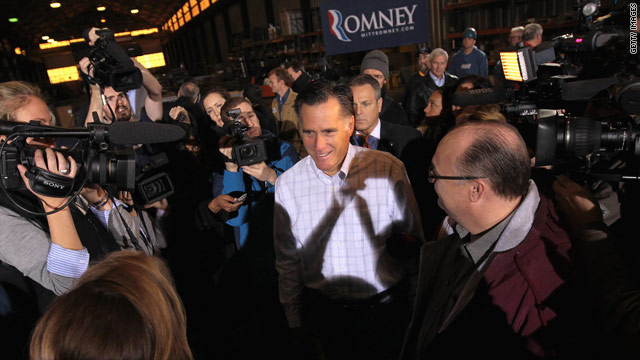 Romney seemed energized by the political coup, telling the Greenville audience: "Today I woke up with a big smile on my face."

He explained he was on the elliptical at his Iowa hotel Friday morning when he flipped on the TV.

"Someone came on TV and I'll tell you, what she said brightened my day in a way that far exceeded that smile," he said of Haley's endorsement.

Voters crowded into the fire station to see the newest political duo, while dozens more people huddled under an awning in the drizzle outside in an overflow area. Before speaking, both Romney and Haley greeted the voters who weren't allowed to enter the crowded room.

Haley said she decided to back Romney because of his experience as governor and as a private businessman – and most especially, the fact he has not spent time working in Washington.

"I don't think you've got a friend to the unions in this man," she said to audience applause.

After the event, a reporter asked Haley whether Romney's Mormon religion might be a stumbling block for some evangelical voters. She demurred.

After proclaiming he'd had fun at a GOP debate in Sioux City the night before, Romney distanced himself from a stance taken by his chief opponent on stage that night. Former House Speaker Newt Gingrich said Thursday he would support issuing subpoenas for some federal judges to appear before Congress.

"The idea of judges being subpoenaed before Congress to explain their decisions, it's not a good idea," he told reporters. "There is a separation of powers in this country. I don't think the American people want to substitute Congress for the courts."

Gingrich plans to hold a conference call on the role of the judicial branch Saturday morning.

Asked about Romney's chances in South Carolina, Haley pointed to his campaign's first television advertisement in the state airing that day and promised to tour the state with the former Massachusetts governor.

"Once his message gets out there I know the people of South Carolina will be able to deal with it, and be excited about it," she said.

Romney said he was hopeful, and joked about counting every delegate in a nomination fight he has predicted will drag out for months.

"I want to win in South Carolina," he said. "I think 50 delegates. But who's counting?"

In a CNN/Time/ORC Poll taken between Nov. 29-Dec. 6, Romney trailed Gingrich in South Carolina by 23 percentage points, coming in at 20% to Gingrich's 43%.