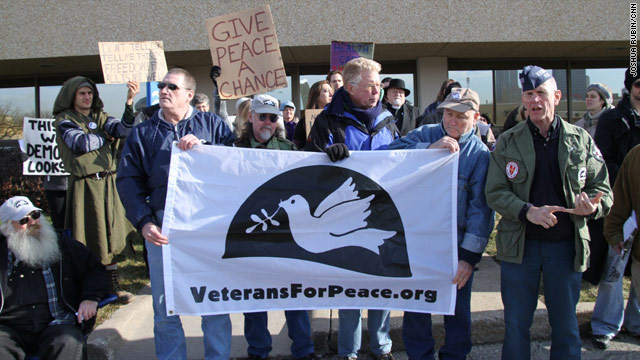 Using the people-powered megaphone the Occupy movement calls a "mic check," some 35 protesters spoke with a unified voice.

"To fulfill the Occupy Wall Street movement's call to return our country's economic and political life back to the 99%, we will need a president who will make the dismantling of the U.S. military empire their number one foreign policy priority," they said.

Protesters had planned to commit an act of civil disobedience, by entering Obama's headquarters and staying put, but were thwarted because the campaign office was closed.

Rather than be discouraged, however, they said the closed office was a victory.

"We know this office is open on Saturdays ... they knew we were coming, and President Obama is afraid to deal with us," said Frank Cordaro, a protester.

A call to the main number at the Des Moines office was not answered on Saturday.

As the Iowa Caucus heats up, so too will the protests in and around Des Moines. The local Occupy movement says it expects hundreds of people from across the country to join its protests in what is being dubbed "Occupy the Caucuses."