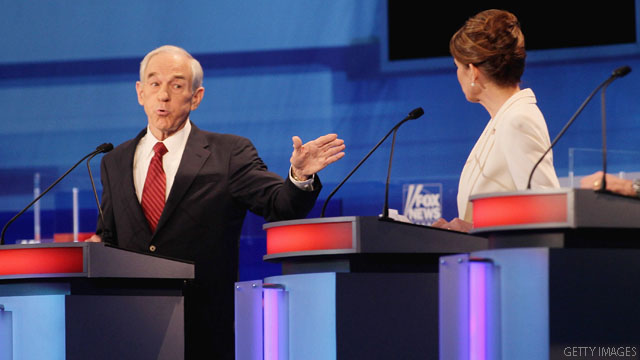 "She hates Muslims," Paul said on NBC's "The Tonight Show with Jay Leno" on Friday. "She wants to go get 'em."

Paul failed to elaborate further. His remarks follow his heated exchange with Bachmann during Thursday night's debate when the two argued about Iran's nuclear development program.

Paul strongly disputed Bachmann's claim that Iran was "within just months" of developing a nuclear bomb and blasted U.S. sanctions against Iran as an "act of war."

A staunch non-interventionist, Paul urged the government to use diplomats to resolve the situation.

Bachmann, in response, ripped into Paul's position, describing it as one that seriously underestimates Iran's intentions.

Both candidates continued to argue about the issue, creating one of the most intense moments of the night.

Bachmann pointed to the Iranian constitution, saying the Islamic republic's "mission is to extend jihad across the world and eventually to set up a worldwide caliphate."

She added: "We would be fools and knaves to ignore their purpose and their plan."

Paul quickly fired back, saying he, too, didn't want to see Iran with a nuclear weapon. But he said that Bachmann was portraying a skewed view of the Muslim world.

"To declare war on 1.2 billion Muslims and say all Muslims are the same, this is dangerous talk," Paul said. "Yeah, there are some radicals, but they don't come here to kill us because we're free and prosperous."

Responding to Paul's answer on "The Tonight Show," Bachmann on Saturday said his statement was "outrageous."

"Of course I don't hate Muslims. That's an absolutely outrageous statement. What I love are Americans and the American people," she said at a campaign stop in Iowa.

She went on to claim that the "true hatred" was coming from Iranian President Mahmoud Ahmadinejad, who in 2005 quoted a remark from Ayatollah Khomeini, founder of Iran's Islamic revolution, that Israel "must be wiped out from the map of the world."

"As Commander-in-Chief I will stand for the safety and security of the American people. I think, quite frankly, with all due respect to my colleague, that Ron Paul would make a very dangerous president because he doesn't understand this threat," she said.

Paul's answer about Bachmann on Leno's show Friday night came amid a lightning round of questions from the TV host, who asked Paul to comment on each of his presidential rivals.

And as for the current front-runners, former Massachusetts Gov. Mitt Romney and former House Speaker Newt Gingrich, Paul gained laughs when he said the two candidates should go back to their old jobs.